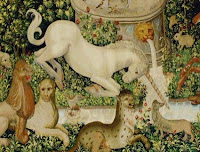 First cab off the rank for our series of guest posts by contributors to the Light Touch Paper Stand Clear anthology is Ripley Patton, who has written for Andromeda Spaceways Inflight Magazine, so was well known to Simon Petrie and Edwina Harvey when they were inviting submissions. Here’s what the editors of LTP have to say about her story:
Simon:
Ripley’s ‘Mary Had A Unicorn’ takes the concept of horn-headed horsies in what was, for me at least, a completely unexpected and rewarding direction. Mary is the warts-and-all teenager in a warts-and-all family, and Patience the unicorn is Mary’s shiny white bete noire. Ripley (who calls this kind of thing ‘mythpunk’) pulls off a rounded, moving story that manages to make unicorns cool.
Edwina:
I loved the sarky know-it-all teenage girl Ripley has painted so well in this piece, and how she discovers she *doesn’t* know everything after all.  I think Ripley does “Rites of Passage” stories very well.
Because of her New Zealand connections,  I chose to read from Ripley’s story at the launch at UnCONventional, the NZ Natcon.  I started at the beginning of the story and stopped at a cliff-hanger about one and a half pages later. I have to admit there was something satisfying in hearing groans from the audience who wanted to hear more. They were clearly hooked by Ripley’s wonderful tale!
And here’s Ripley:
Mary Had a Unicorn Excerpt:
The last thing on earth Mary Maloney wanted was a unicorn. She wasn't an addict, no matter what they said at the clinic. Sure, she used sometimes just for fun, or when she was down. But who didn't? It wasn't any different than the booze her dad tanked. Or the pot he smoked. But you didn't see anyone assigning him a freakin' genetically engineered, one-horned parole officer.
They made her pick out the unicorn herself. They had them all in a little room, one of those big-windowed rooms pet shops have at the very front to display puppies. There were seven of them, all white and no taller than her knees, but they didn't play or romp, or do anything cute like that. They just stood in a huddle with their shimmery horns jutting in various directions. Except one stood away from the rest, and Mary chose that one.
When I got the call for submissions from Simon Petrie for a new speculative fiction anthology he and Edwina Harvey were putting together, of course, I was thrilled. The title/theme "Light Touch Paper, Stand Clear," was even more intriguing. To me, it brought forth thoughts of catalysts and change. What is the impetus that moves us from a stuck place to a place of growth or progress? What is the spark that blows everything we've known apart and forces us to rebuild our world or world view? It also made me think about a story I had written that didn't have an ending. A story that was stuck in place and needed a spark. That story was titled "Mary Had a Unicorn".
So, I went back and had a look at it. Originally, "Mary had a Unicorn" was inspired by the nursery rhyme Mary had a Little Lamb, coupled with the mythology that unicorn horns have detoxifying properties. Ground unicorn horn in a polluted lake would make it drinkable. When a captive unicorn dipped its horn in the King's cup, he need not fear being poisoned. And what is our modern poison of choice? Alcohol. Illicit drugs. Coffee. Chocolate. The question arose in my mind, what if unicorns existed today? How would we exploit those properties to address the current issues of our own broken society?
And this is what I came up with—miniature, genetically engineered unicorns, first used in airports to sniff out drugs and explosives, but later prescribed and sold by the welfare system as a cure for drug addicts. What can I say? My mind works in mysterious ways.
Thankfully, for some reason, Simon and Edwina's prompt was the spark I needed, and an ending for "Mary had a Unicorn" presented itself. I happily sent it off to them and they happily accepted it.
Ripley Patton's Bio: 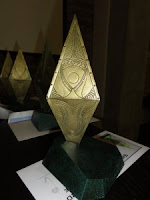 Ripley Patton lives and writes from Portland, Oregon having recently finished a five year jaunt in New Zealand. She has had numerous speculative fiction short stories published, both on-line and in print, and won the Sir Julius Vogel Award for best short story of 2009. Ripley is also the founder and current president of SpecFicNZ, the national association for creators and writers of speculative fiction in and from New Zealand. She has just finished her first novel, a YA paranormal thriller titled Ghost Hand, and lives with one husband, one cat, and two teenage literary critics who also happen to be her children. You can find more about Ripley and her work on her website HERE.
Ripley also says:
Though "Mary had a Unicorn" features a young adult protagonist, an anti-heroine, I don't really consider it a story geared toward that audience. I do love to write Young Adult fiction, however, and have just finished my first novel, a YA paranormal thriller titled Ghost Hand. Here's a little blurb for Ghost Hand to whet your appetite;
“Olivia Black has a rare birth defect known as Psyche Sans Soma or PSS. She was born with an ethereal, glowy, see-though right hand where her flesh-and-blood hand should have been. But that's old news. Everyone in her small Midwestern town is used to it. But when the new guy in Olivia's Calc class gawks and stares and makes her feel like a freak, her ghost hand has a strange reaction, one that will send her running from her school and her friends and everything she's ever known on a wild chase to find the key to controlling the strange new power of her hand.”
Want to know more? You can read the first two chapters of Ghost Hand on my website HERE.
Posted by Sue Bursztynski at 11:10 PM