I have to say I have only read a little of James Joyce's fiction and that was because I had to, in high school. A Portrait Of The Artist As A Young Man was on the Year 12 syllabus and reading the stream-of-consciousness narrative for the first time was not easy. I suspect that it would have meant more if we'd had some background in Irish history, but never mind. I have finally downloaded Ulysses from Project Gutenberg and will get stuck into it, now I know more, and maybe back to Portrait. 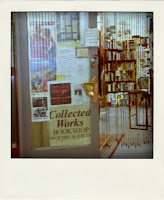 What I have done is been at Collected Works Bookshop in Melbourne, though not this year, to enjoy the celebration of all things Joyce and all things Irish, with costumed fans acting out bits of the novel and Kris Hemmensley and his wife Loretta, the shop's proprietors, serving Irish beer and Irish soda bread. I gave Loretta my recipe, which I got from the London Ritz Book of Breakfasts. It has been very successful when I have made it for family breakfasts. Loretta tried it and liked it. I probably shouldn't publish the recipe here, for copyright reasons, but if anyone reading this wants to try their hand at this soda bread recipe, email me. (I mentioned once to my Irish library technician, Barbara, that I made soda bread and she was surprised because she knows of it only as something you have with bacon, which I, of course, don't eat).

My oven is STILL on the blink, so no soda bread for me, but I will go off and play some Irish music (the Chieftains, perhaps?) and look at photos of Dublin. One of these days I mean to renew my passport, which expires next year, and get my travel agent nephew Mark to book me a ticket to Ireland. It's too beautiful a place for me not to visit.

Posted by Sue Bursztynski at 12:49 AM