Back From The Con, Loaded With Books!

I have spent a delightful Queen's Birthday weekend at Continuum 8, Craftonomicon, a convention with a craft theme and an undersea image, so that the Maskobalo was "Enchantment Under The Sea", presumably a reference to the school dance in Back To The Future. I will add some photos when I've downloaded the pictures I took on my phone.

The craft theme appealed to me, though I missed the craft events on the fourth floor. They put out a basket of wool and needles with the label "Knit Me!", so I chose a bright orange ball of thick yarn and started to knit a scarf, the only thing I know how to do. I hoped to complete it by the end of the weekend, but hadn't the time. I may finish it in the next day or two; with only one ball of wool the final length will be whatever it is. It's already long enough to go around my neck, and very warm. 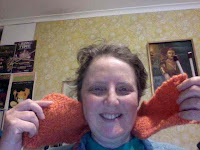 I met my friends Edwina Harvey and Simon Petrie, who had the latest Andromeda Spaceways magazines and their new anthology Light Touch Paper,Stand Back, in which I had a story. I spent some time on the table with them, but also got to some panels apart from the ones of which I was a member. Saturday night we launched both ASIM #56 and Light Touch Paper. It was a wonderful event and we got an impressively large number of people attending. A few people read from their own stories in LTP, 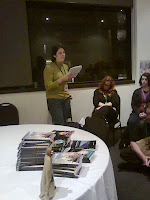 but as it was also an ASIM event Ian Nichols and I read from the stories we had selected for the issue; in my case, the author lives in Greece, so couldn't be there. It was a wonderful story called "What The Carp Saw(And Could Not Tell While Alive)", a murder mystery set in ancient Egypt, with magic and, well, cats! The author loves cats and writes a lot about them. Edwina had ordered two cakes with gorgeous icing, one with the book cover on it. 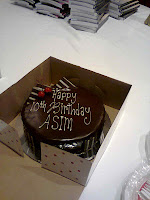 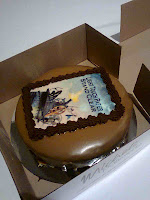 Yesterday I moderated a panel about book blogging, this morning I did one about sparkly vampires and the last panel for the day was on YA fiction that ISN'T paranormal romance. There was me, the delightful Michael Pryor, Kelly Link andLiz Barr. Kelly Link, the con GoH, impressed me by having read Fiona Wood's Aussie novel Six Impossible Things, which she liked very much. In her turn, she was impressed with the cover of Wolfborn, so I gave her a copy for plane reading - she said she had nothing to read on the plane, so she has now. ;-)

I ended the day with some friends over hot chocolate on Lygon Street.


Some reading matter I picked up: a Ray Harryhausen autobiography with, of course, lots of pics- this will probably go to my nephew Max, who intends to be the next Adam Elliott, but he'll get it AFTER I have had a good browse. Gillian Polack's cookbook connected with five historical feasts she arranged for Conflux. Damnation and Dames, a Ticonderoga publication I'd intended to submit to and never got around to finishing my story. ASIM 54 and 56. My contributor's copy of Light Touch Paper. I also, of course, had my Wolfborn story in 54. So now my four stories have been published and time to write and submit some more.

Meanwhile, off to bed to be up early for work again tomorrow. Back to the kitchen, Cinders! The ball is over.
Posted by Sue Bursztynski at 3:39 AM