The Stella Prize Schools Program - An Interview With Bec Kavanagh!

Earlier this year, we had a wonderful guest speaker, Alice Pung, compliments of the Stella Prize Schools Program. I had spoken to Ambelin Kwaymullina at Continuum, the annual Melbourne SF convention, telling her about my disadvantaged school, and she let me know that the Stellas were setting up a schools program and might be willing to help us out with a guest speaker, something we can't afford ourselves. They were, bless them, and I invited the Schools Coordinator, Bec Kavanagh, to talk about the program here, because I think they're doing a fabulous job in promoting women's writing and getting children interested. Today I am posting some interview questions I sent Bec, along with her photo. Tomorrow there will be a guest post from Bec, with more details. Enjoy! 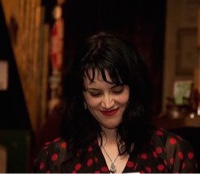 How did the Stella Prize Schools Program Begin?

How have schools responded to this program so far?

So far we’ve had incredibly positive feedback from schools – one teacher who took part in a free PD session commented that it ‘injected a lot of understanding and enthusiasm into the staff who attended’. The Schools Program certainly seems to be starting those incredibly important discussions about how and why particular books are studied more often than others, and the ways in which young people’s perceptions of themselves and the world are affected by the books they study.

Do you mostly work at girls' schools or equally at co-ed schools?

I’ve run sessions at both co-ed schools and girls’ schools. We want to work with all schools (including boys’ schools), as gender bias is something that affects all young people.

What response do you get from boys?

Primarily, the sessions I run are with staff, and I’ve had some really wonderful responses from male staff members about the changes they’d like to make in their classrooms. One comment that sticks with me came from a boy who attended the ‘Girls’ Books vs Boys’ Books’ session at the Melbourne Writers Festival in 2014. We were talking about gendered marketing, and the way covers are often designed specifically to appeal to either girls or boys. We showed the students a particular book, and asked if they would read it based on the cover. Many of the boys in the audience said ‘no’. We then described the contents of the book and went into more detail about the plot and the themes – many of the boys who had said ‘no’ at first changed their answer to ‘yes’. We asked the audience how they felt about being ‘shut out’ of a book by gendered marketing, and one of the boys responded, ‘I feel betrayed’. I thought that was the most succinct and powerful response. We’re betraying all young people by telling them that who they are – what stories they should be engaging with and even what they can achieve – is defined by their gender.

It has often been said that girls will read anything, while boys prefer to read books with male characters - how true have you found this? (For the record, it hasn't been completely true at my school, where the main fans of Garth Nix’s Old Kingdom series, Philip Pullman's His Dark Materials and even Tamora Pierce's novels, all with strong female leads, have been boys)

In my experience visiting schools and talking to teens about books, it’s a mixed bag. I think that teens aren’t actually bothered by whether the author or protagonist is the same gender as them or not. A more significant deciding factor is the way books are presented. The designs of many genre books are fairly gender neutral, but in realistic YA there is more of a boys books/girls books divide, which is largely derived from how they are marketed. That’s a real hurdle to consider when we’re encouraging teenagers to read widely.

Are you thinking of having a junior version of the Stella Prize at some stage, ie for books written for children and teens?

Our current priority for the Schools Program is to continue lobbying for change on school curricula and promoting greater diversity in the range of books students are exposed to. We put a lot of work into our annually updated Education Kit to support teachers and enable them to address these issues in the classroom. But in the future, anything’s possible!

Thank you, Bec, for your thoughtful answers to the questions!

Posted by Sue Bursztynski at 1:10 AM