Review Goodies From Bloomsbury And Allen And Unwin! 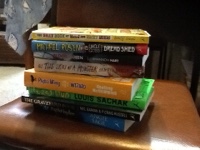 And here they are! I admit I've had the Angie Sage and Neil Gaiman books the longest, but be patient and you'll hear about them all. Most of them have come in the last few days. About a week ago, I heard from Geoffrey McSkimming, author of the Cairo Jim books and, most recently, the Phyllis Wong series, one of which I have read and enjoyed. He told me that the third book was out, in case I didn't know. I offered a review, of course, and did mention that he hadn't sent me the answers to the interview questions I had asked him a while back. Those were mostly about Cairo Jim, so it was a bit late now, but he promised that this time he would answer some questions about the current series, with a bit of Cairo Jim thrown in. I don't know if I have ever mentioned it here, but it was thanks to Geoffrey that I discovered the wonderful market of the NSW School Magazine, when he was speaking at a library conference I attended.

There are two humorous books from Bloomsbury which shouldn't take me too long to read, The Silly Book Of Weird And Wacky Words and Uncle Gobb And The Dread Shed. There's a brand new book by Louis Sachar, Fuzzy Mud. I've only read two others, Holes and one on the theme of bridge(and who would have thought that bridge would be as complex a game as chess?). Both are contemporary with a touch of fantasy, a style I like, so I'm looking forward to reading this one.

When I emailed the lady doing publicity for Allen And Unwin to ask for the Phyllis Wong book, The Waking Of The Wizard, she told me that while she was about it, she would also send me The Skin Of A Monster, a debut novel by a Sydney writer, Kathryn Barker and, when available, the latest novels by Catherine Jinks and Garth Nix. I don't know the titles of those yet, but look forward to reading them.

Finally, Rhiannon Hart, author of the Lharmell trilogy, sent me a copy of the final Lharmell novel, Blood Queen. It took a while getting here, but finally arrived today with the two from Allen And Unwin. I don't know if you've read the first two, but I thought them very good and have reviewed them on this site in case you want to take a look. Rhiannon has left Australia and is now living in London, which is a loss for Australian YA fiction, but hopefully there will be more for us to read in future.
Posted by Sue Bursztynski at 11:20 PM