On Rereading Mark Twain's The Prince And The Pauper

Yesterday morning I awoke to ABC Classical FM, which had a film composer theme. The particular piece they were playing was an Erich Korngold violin concerto. Now, Korngold, like other composers best known for their film music, did other stuff - and the other stuff sneaks in themes from their movies. In this case, the tune sounded very familiar to me, because I'm a huge fan of this particular composer, and of film music in general. (When my younger brother was growing up, he and I  played a lot of film scores together and discussed them, and he saved his pennies - literally! -  to buy the music of a new movie called Star Wars. He still has the vinyl double album, which is labelled The Star Wars, though these days he prefers to play the CD)

I spent most of yesterday trying to remember where I had heard that tune before and in the end, the "once upon a time, did it happen or didn't it?" flavour told me. It was from the 1937 version of The Prince And The Pauper, in which the title roles were played by twins and Errol Flynn played the role of Miles Hendon, the returned soldier who helps the young prince, even though he doesn't believe him. There have been other versions of the movie since then, including one with Oliver Reed as a very attractive Miles, Charlton Heston as the King and a rather-too-old teenage Mark Lester as the boys, and the Disney version with the dashing Guy Williams as Miles and Aussie actor Sean Scully as the boys. There has even been, though I haven't seen it yet(the joys of YouTube will fix that), a TV serial, with some accurate early music, judging by the bits I heard on YouTube. But that score for the 1937 version has to be the best.

For one thing, it inspired me to go and download the book from Project Gutenberg, since I couldn't find my paperback copy. And I'm rereading it and loving it all over again. While the idea is unlikely, all the author asks us to believe, in the first chapter, is that it could have happened. And he takes the trouble to make it possible for Tom Canty, the pauper, to be accepted as the prince, if one gone insane. He can read and write and knows some Latin, because there's a priest living in his building, one of those thrown out during the dissolution of the monasteries. Father Andrew has taught him. He's not even dirty because he has discovered he quite likes washing.  And he has been playing prince in his mind and with his friends for a long time, so has had some practice. 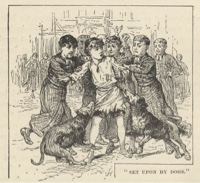 I suspect if Mark Twain was alive today he would be considered something of a lefty. Reading novels like this one, Connecticut Yankee and Huckleberry Finn makes me think that he had a thing about the class system and hated slavery. He doesn't just work it into the storyline, he stops and argues about it during each novel. Two of these three novels are written in first person, but even this one, which isn't, tells you what the author thinks.

And read this one. It has inspired quite a lot of other stories, check out the cultural references in Wikipedia to start with. I personally think there's a touch of this theme in The Prisoner Of Zenda, though the hero is not a pauper, and that has its own inspirations, such as the movie Dave, in which the Rudolf Rassendyl character has to pose as the US President, who has collapsed suddenly.

But read the Mark Twain book. Read it. I have seen someone on Goodreads give it a one star rating because they don't like that "Shakespeare language". But that's only the dialogue,the rest is not ye olde English, and even so, it's easy enough reading. I would say any child who reads well and enjoys historical adventure could handle it. I know I did.

So read it and play some Korngold music while you read!

Posted by Sue Bursztynski at 6:26 PM

Those classic books were truly awesome back in the day - such great premises that have now been copied over and over again. I think Twain would definitely be a lefty! lol

Very true! They were copied because they were so good. Nowadays, when something is copied it's because it's selling and the publisher wants more of the same. ;-)