Today, I took a day's leave without pay to attend the Young Australian Best Book Awards, held this year at Haileybury College in East Brighton. I would have liked to take some students, but I just couldn't. The most interest would have come from Years 7 and 8 and I would have had to come to school and pick them up and then take them to the event and back to school again and East Brighton was just too far from Sunshine. I did ask the late Graham Davey once if my school could possibly host it. "Sure!" he said. "Can you fit in 300 students?" And of course, without a school hall, I couldn't. My library fits 200 and that's if they're all on the floor(which isn't a problem as they usually are on the floor at the YABBAs) but not much space for 20 writers to sign afterwards. So the event tends to go to Eastern/southeastern private schools, although Graham told me it would have been nice to have the event in the western suburbs for once.

So I went as a writer and at the same time, they had a lovely box of books waiting for my library, though it was too big and heavy for me to lug home by public transport, so Sue Osborne, the TL, kindly arranged for the books to be posted. I would have loved to take them in tomorrow to show my book loving students, but will just have to wait. Even better, she said that in future, she would send me anything she got for the Premier's Reading Challenge for my library!

Here are the winners of this year's awards:

Of all the winners, alas, only Andy Griffiths was there to collect his award. Morris Gleitzman andCarol Chataway were sick. Emily Rodda sent a video acceptance speech.

And here's something I'd like to say: Andy Griffiths is a delightful man. I bought a copy of his newest book for Priyanka, my most enthusiastic book clubber, and got him to sign it, then asked for a photo with him for my students to enjoy. I don't think he will mind my showing it here. 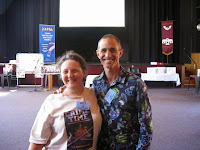 And then he gave me some signed copies of his Schooling Around series, which has just been re-released with new covers. We do have the series, but the individual volumes keep going missing. The students will be delighted!

I also had my photo taken with Gabrielle Wang, whose book A Ghost In My Suitcase is being read by some of our students for Literature Circles, and who asked after Sweet, my talented student who did a manga version of a scene from her novel. 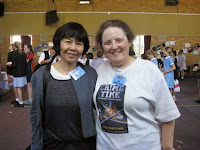 I was sitting next to Felice Arena, author of the Specky Magee series, and told him some of our students had studied the first book for Literature Circles. I don't know yet what they have in mind for their creative response, but he agreed that he would do an interview if they wanted one. We'll see how they go. I think they were playing around with a book trailer, but weren't too enthusiastic about it.

Anyway, I thought they might enjoy seeing a picture of him with me, so here it is! 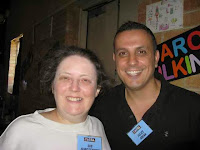 I also had a chance to chat with Oliver Phommavanh, a primary teacher and the author of some hilarious books about life in primary school, especially when you're growing up Thai. We saw him at the State Library a couple of years ago, and he could make a living as a stand-up comic, honestly! I didn't manage to get a picture with him, unfortunately, due to circumstances beyond our control.

The ceremony included the amusing doodle thingie, where the kids get to do a Mr Squiggle, giving a few lines to authors or illustrators which they have to turn into a picture, which is then signed and put up in the school. This year's illustrators were Bruce Whatley and Felice Arena. I was very impressed at how well someone who isn't officially an illustrator could do the job. It was good fun for all.

There were student performances and then, after morning tea, we all sat down to sign. I was sitting next to my friend George Ivanoff, who has done seventy books in his time and is making a living from his writing. He tells me most education publishers have now gone to flat fee payments, not very good if you're counting on royalties. It was nice to be with him, anyway, and we were both kept busy. I was pleasantly surprised to find that Dymock's had brought some copies of Wolfborn and they actually sold some! I wouldn't have thought they could sell it to primary students, but there you are. The young women came and got me to sign their books and I gave them bookmarks(they were Crime Time bookmarks - if I'd known, I would have brought some Wolfborn ones as well). I even signed a copy of Your Cat Could Be A Spy! It was a library copy, but this means someone knew I would be there and sent a student with the book. How cool is that?

We were fed lunch as well and then George took me to Moorabbin station, from which I was able to catch a train to Glenhuntly and then a tram home. A nice day all round!


Posted by Sue Bursztynski at 9:48 PM

Congrats to the winners! This looks like a great experience :)

Sarah Allen
(From Sarah, with Joy)

Yes, it's a wonderful annual event in which the kids get to vote for their favourite books and then come along to actually meet the authors.