Two Evenings With Harry Potter And His Friends!

For the last two nights I have been in a magical world. Firstly, the magic of the Princess Theatre. This is the place where long running shows are performed in Melbourne. I’ve seen plenty there, including Phantom Of The Opera. I used to go there for the opera before that was moved to the Arts Centre. I remember visiting the Paperback Bookshop, which is still there, and which was open late at night, so I could go after the opera!

The theatre as we know it has been there since the 1880s, but there were other performing spaces on the site as far back as 1854. It even has its own ghost! Like the style? It’s called Second Empire. That dome is part of a roof which is supposed to be able to open, though I don’t think it has happened in my lifetime. Any time you enter that space, you are experiencing magic. And they have revamped inside for the magic of Hogwarts!  Even the carpets have elaborate H patterns, and the walls more patterns. 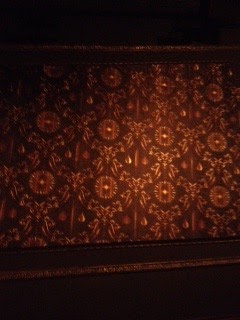 Here is me in the foyer, proving I should never take selfies. Ah, well. 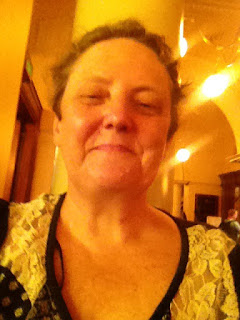 I arrived early both nights, as they are working hard to make sure nobody tries to film the show, beginning with inspecting bags. I usually carry a tote bag, but unearthed the one handbag I haven’t wrecked, and placed in it my phone(needed for my ticket, as I went for “mobile tickets”), my keys, my wallet, a print book to read on the tram and opera glasses. So they just glanced at my bag and waved me on. I was there about an hour and a half early and ended up in the souvenir shop, where I bought far more merchandise than I intended. Of course, I had to get a programme for such a major event. It was not cheap, but it described the process of creating the production, including the magic, and there were no ads.

If I had stuck to the programme, it would have been fair enough, but oh, no, I just had to get the t shirt as well! It’s black and gold and flashy and bound to get fellow passengers on the bus, tram and train talking to me... I also bought a Hogwarts pin - dark blue, with R for Ravenclaw, my Pottermore House. That was the cheapest item, at $10, and has one of those pins that come off if you aren’t careful. One more thing was the music. I bought the CD on the first night, before hearing it. I always buy the music of any show that makes it available. It’s by Imogen Heap.

I settled into my seat, near the back of the stalls, not very comfortable, and to the side, but I didn’t have much trouble with the view, except the balcony hanging above, cutting off some of the arch. Next time I sit in the gods - cheaper and you can always use your opera glasses or binoculars if you want a closer look. Still, I did see what was happening on stage.

I can’t go into detail here because of spoilers and there has been a tradition from the start, even seen outside the theatre: “Keep the secrets.” They even give you a badge with that in it afterwards.  But I am sure there is enough already out there that I can write about without spoilers, so here I go.

From the moment the show began, with the last scene of Harry Potter And The Deathly Hallows, it swept me back into the world I left so regretfully several years ago. And here is a warning: if you haven’t read the books or at least seen the films, there will be a lot that goes over your head. The audience with whom I shared the theatre were fans. They laughed at the in jokes. They gasped or said, “Oh...” at the sad bits. These were characters they knew and loved, a world they had missed, as I had. In some ways, it felt like being at a science fiction convention.

There were quite a few children along with their parents. I was a bit doubtful about that, as it really isn’t for kids, but these kids were wearing Harry Potter costumes or jewellery, and one young lady, whose Dad had bought her a House pendant, was wearing a Harry Potter-patterned dress her mother had bought at Big W. So, plenty of young fans!

They employed someone to teach the cast magic tricks - as it said in the programme, regular magicians take years to learn, these people had only a few weeks. Obviously there were a lot of special effects and I have to tell you, I have no idea how they were done! Characters taking polyjuice potion and almost immediately reappearing as the characters they were disguised as - and then back to what they were. A water trick in the middle of the stage. Characters zapping each other and being thrown backwards. Flying Dementors - were there people under those robes or was it another effect?

I don’t know. But what it was really about was family, about the woes of being a teenager, especially one who has to put up with being the child of a famous - or infamous - father, and having only one friend, who is also an outcast.

William McKenna was Scorpius Malfoy. Make note of the name; this young man, barely out of Year 12, is in his first role, but it won’t be his last. He performed the role brilliantly. When he was being funny, we laughed. When he was grieving, we grieved with him.

Gareth Reeves played Harry Potter at 40 years old, a frustrated father who has no idea how to bond with his son, Albus(Sean Rees-Wemyss). Draco Malfoy(Tom Wren), the bane of Harry’s childhood, is also a father who is having problems relating to a son.

It was funny, it was sad, it was exciting and magical in every way. I don’t know if it will be shown outside Melbourne during its Australian run, but if you can get a ticket, go and see it! It’s worth every cent.

Posted by Sue Bursztynski at 8:56 PM

Super post. As you know I am in the middle of reading the books for the first time. However, I am also familiar with all thd films. It sounds like the plot is very snd everything else is very well done. It also seems that you had a great experience. I would love to go see this.

Both sad and funny, and deeply satisfying. Where do you live, Brian? Somewhere within reach of a production? It’s expensive to see, but well worth it.

What an amazing experience! Reading about it made me nostalgic for my first time reading the books and watching the movies. It's such a great world to discover!

Hi, Jenny! Yes, it’s indeed a wonderful world to discover. There can only be one first discovery, but after that it becomes comfort reading, which is also nice. I am rereading Goblet Of Fire, which happened to be in the pile by my bedside.

Sue, I read the screenplay because I knew I wouldn't be able to see the play (I wish it would tour). Having read your post I am so disappointed I can't see it on stage *sigh*.

Yes, I read the play for the same reason, assuming it would never get here, so I knew what would happen. It didn’t spoil it for me at all. The show will be on for months - perhaps you can hint at family and friends to chip in for a ticket for your birthday? 🙂 There is a YHA in North Melbourne, not far from the city, if you can’t spend much on accommodation, and flight from Canberra is not TOO expensive... Come to think of it, it does add up, doesn’t it? Start saving!

That's a BEAUTIFUL, grand old theater, indeed!! And I would have gone CRAZY buying up Harry Potter merchandise!!

I'm glad you enjoyed this play, and for TWO nights, too!! WOW!!!

So you're Ravenclaw, eh? Well, I haven't done the Sorting Hat thing, but I KNOW I'm in Gryffindor!!

Thanks SO much for sharing!! Have a MAGICAL Sunday!!! Wingardium leviosa!!! :)

Hi Maria! I think the play may still be on Broadway and while a Broadway play is very expensive, I bet there are special packages for people travelling from interstate. I went from Melbourne to Sydney to see Cats many years ago. Mind you, I stayed with a friend for the weekend!

The Princess is a gorgeous theatre, yes, but not the only fascinating historic theatre in Melbourne. The Regent Theatre is stunningly beautiful and has a history - it was saved from being pulled down years ago, by the builders labourers union! They also do musicals there; I have seen some, including Beauty And The Beast, with Hugh Jackman as Gaston, before he was famous!

I used to be a Hufflepuff before the site was revamped. They used to sort you via a questionnaire, but this time it was just a click and hey, you’re a Ravenclaw!