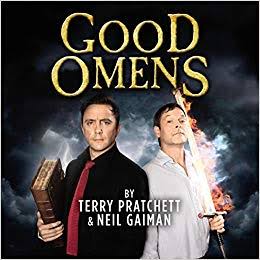 I have no idea when I will get to see the brand new Good Omens TV show, with all those amazing actors in it, but I found that the radio play, which I had wanted to hear for ages, was available on Apple Books, so I downloaded it to my iPad with great rejoicing!

Good Omens, in case you don’t know it, was written by two of the most wonderful fantasy writers of the century, Terry Pratchett and Neil Gaiman. The original idea was by Neil Gaiman, who wanted to write something called William The Antichrist, as a sendup of the Just William books, but it changed - a lot. In the end, the authors forgot, mostly, who had written what. The Antichrist, Adam Young, is an eleven year old boy, but was delivered to the wrong family, so grew up human. The end of the world is coming. There are two characters, Crowley the demon(he was the serpent in Eden, who was tempting Eve under orders to “get up there and cause trouble”)and Aziraphale, an angel and part time secondhand bookshop owner(he gave Adam and Eve his flaming sword to keep them warm when they were banished from Eden), who are trying to stop it. They have been on Earth for 6000 years and have no desire to go back to where they came from.

Crowley was played, in this, by Peter Serafinowicz, who was in Shaun of the Dead, Guardians Of The Galaxy and did the voice of Darth Maul. I’m looking forward to seeing David Tennant in the role, but he was very good. Aziraphale was popular British comedy actor Mark Heap, who was very funny indeed.

I was especially interested in Josie Lawrence, who played Agnes Nutter, the 17th century witch whose book of prophecies was completely accurate and as a result was the first book ever to be remaindered, as she will be playing the role again in the TV series.

There are two young things in the story. One is Anathema Device(Charlotte Ritchie), a descendant of Agnes Nutter, who owns the last copy of Agnes’s book and is trying to find the Antichrist before the world ends.

The other is Newton Pulsifer, descendant of the Witchfinder who burned her ancestress. I was especially impressed to find he was played by Colin Morgan, star of the Arthurian TV show Merlin! Wow! He did a very good Newt, who was described by saying that if he went into a phone booth to change he might come out as Clark Kent. The trouble is, I’m now going to see him as Colin Morgan, who is very good looking!

Shadwell the Witchfinder Sergeant was played by Clive Russell, who has done a whole lot of fantasy, including Game Of  Thrones. He was hilarious, just the way I imagined Shadwell.

Oh - and the authors played cameos as the policemen who were following Crowley when he was speeding early in the story. In case you didn’t notice, the policemen were called Terry and Neil.
Look, just follow this link for the rest of the details.
Posted by Sue Bursztynski at 6:42 PM

I *love* Terry Pratchett, but I really can't find time for more viewing so I am going to have to cover my eyes and pretend I didn't read this (thanks, Sue *wink*).

It’s a radio play, if that helps. You can listen to it while you work or jog or whatever...

This is very interesting, Sue! I must confess to never having read either of these authors, but of course I know who they are! Lol. And I had no idea that they had teamed up to do -- of all things -- a radio play! I thought such things were not produced anymore. I must check this out!! :)

The name "Crowley" is especially appropriate for the demon character, as that was the last name of the most infamous (real) black magician of the 19th and 20th centuries -- Aleister Crowley. If you know anything about that guy, you'll know what I mean.

Hi Maria! It’s now Wednesday morning here. How did I not find your comments before?

What! You have never read Sir Terry or Neil Gaiman? Drop everything and start right NOW! Terry Pratchett, now passed away, alas, was the author of many books in the Discworld series, set on a world which is flat and on the backs of four elephants which stand on the bs know a turtle(taken from Hindu mythology, I believe, but VERY British). They are fantasy, but send up many real world things. Don’t start from the beginning, though, as the earlier books are not as good as the later ones. Unusual, isn’t it? But he developed his world as he went. I’ve posted about Discworld, check it out.

You can read this one without having read either Pratchett or Gaiman. It’s a novel - the radio play was written by someone else. People just read and reread it.

Crowley actually starts life as Crawly, when he is a serpent. He changes his name as a human. He does wear snakeskin shoes and has snake eyes, which hides with sunglasses .