The Idylls Of The Queen by Phyllis Ann Karr: a Retroreview 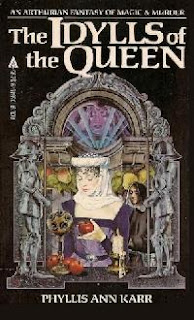 I unearthed this on the bookshelves in my old room at my mother's place. I read it when it first came out and loved it. I had actually been looking for it only recently, as I had a craving to re-read it, but couldn't find it at home.

This story is inspired by an incident in Thomas Malory's Middle English romance Le Morte D'Arthure, a book I read when I was at university. In the original, it goes for about two or three pages. Phyllis Ann Karr has turned it into a novel-length whodunnit.

Queen Guenevere has arranged a small dinner for a couple of dozen of her husband's Round Table knights. All is going well until a young knight, Sir Patrise, drops dead after eating a poisoned apple. The fruit bowl was brought out for the benefit of Sir Gawaine, who loves fruit, so it is suspected by most that Gawaine was the intended victim. However, Mador De La Porte, Patrise's cousin, insists that the Queen is responsible and demands her death. Nobody who was at the dinner can accept his challenge to trial by combat. Her husband can't fight for her, though he offers to, because he has to be the judge. Her lover Lancelot is missing.

It's up to Sir Kay the Seneschal, who is in love with her and, in any case, is quite sure of her innocence, to act as the detective. While several knights, including Kay, go hunting for Lancelot, Kay and the king's son Mordred travel around interviewing everyone who might be a suspect in the matter, from the King's sister Morgana on. As they do so, a whole lot of unsolved past mysteries unwind, including who actually killed the mother of the Orkney brothers Gawaine, Gareth, Gaheris, Agravaine and Mordred.

Basically, it's a journey through Malory. You can get away with not having read the Morte, but if you have, it means more.

It's interesting to see the author's interpretation of the various characters. Mordred is a sad character, a lot more sympathetic than in the traditional versions. Gawaine is more like the lovable hero of Gawain and The Green Knight than Malory's unpleasant Gawain, and is still wearing that stupid green sash to remind him of his fallibility. She does not like some characters you're supposed to like, such as Gareth aka Beaumains, irritating to Kay, who considers him dishonest.  Lancelot is truly awful. You do see them all through Kay's eyes, in fact. Malory's Kay is the boor everyone loves to hate. In this novel, he is the one with the brains. And she doesn't rewrite the characters - she just shows them from another angle so you can see her point.

Ms Karr doesn't bother with history. It's Malory, okay? It happens in a Britain that never was, in the fifth century, with invading Saxons, but also the fifteenth century in which Malory's book was written - and set.

There's magic in it. Nimue, Lady of the Lake, is able to speed up the group's travel time. She actually lives under a lake. Morgan can see images in a bowl of water, though with limitations. The views Kay and his friends see only give a certain amount of information they can interpret.

You do have to like both historical fantasy and crime fiction to be able to appreciate this, but I personally loved what Phyllis Ann Karr did with it. On the other hand, if you have read Malory you'll know whodunnit. Fortunately, I'd forgotten.

I assumed that this book was probably long out of print, but you can get it from Amazon and Book Depository, though with a new cover.

Posted by Sue Bursztynski at 12:25 AM

Hi Sue - this does sound an interesting read ... I'll keep a note of it to read at some stage.

Thanks for the review and for your obvious long interest in the book and subject matter. Looks good - cheers Hilary

Hope you enjoy it as much as I did, when you get around to this read! And yes, I have a lot of books I’ve read and reread over the years.

It's good you found it again. I read a book while on vacation about four or five years ago and thought for sure I knew who the author was, but when I looked through all their books on my Kindle, none fit the story I remember. Maybe it was all a vivid dream...

So, this was a book you read on your Kindle, and then you couldn’t find it? How frustrating that must have been! Do you remember if it was one you bought or one that came with the reader? Suggestion: ask a librarian. We’re very good at this sort of thing!

It's so nice you were able to find a copy just when you were wanting to reread. I hate not being able to find my copy (or a copy) of a book I'm thinking of and want to read.

It is frustrating, isn’t It?

I ADORE anything to do with the King Arthur tales!! To be honest, I'm not that much into crime fiction, but this book does sound like a FASCINATING blend of the Arthurian stories with mystery! It's also a VERY interesting take on Malory!

Thanks for putting this one on my radar!! I'm adding it to my Goodreads shelves!! <3 :)

I agree, much better than the newer cover. I mean, a castle, for goodness sake! How does THAT connect to THIS story? But if you want to read it, you may have to settle for the new cover.