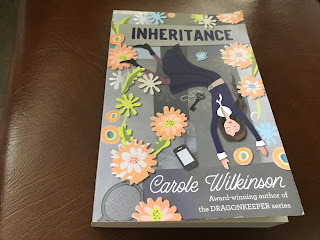 Fourteen year old Nic is left with her grandfather on the family property, Yaratgil, in Victoria’s Western district, while her musician father works on a cruise ship. Her mother has been gone since the day she was born. Yaratgil has been around since her mother’s ancestors, the Mitchells, arrived from Scotland in the 1830s and built it. Living with her grandfather is not easy and she has not found it easy, either, to make friends at her new school, as the Mitchell ancestors were not popular and anyone of that family is likely to be snubbed, even after a hundred years. She does become friends with a small group of kids who are pretty much outcasts themselves, including a boy called Thor, an indigenous boy whose hippie (white) mother sells New Age stuff in the small town.

Then she finds something that enables her to time travel in the local  area - and she discovers, to her horror, that some of her ancestors did some dreadful things ...

The time-slip story works well. Moving around from one historical period to another, with different viewpoints, the mystery Nic has to solve eventually slots together like the stones she uses to time travel. She finds there are some things she can’t fix and others she can. Her new schoolfriend Thor has his own issues and the two of them work together to help each other.

I liked the huge role historical research plays in this novel, and the mention of Victoria’s State Library, Public Records Office and the National Library’s Trove archive, which holds so many digital newspapers, and which I’ve used so often myself. It’s a novel set very much in the present day, with modern methods of looking stuff up. At one point, Thor is distressed that some important cuttings are missing, but Nic smiles and offers to introduce him to Trove. Missing physical information is no longer an issue in an adventure story.

I liked the characters, including Nic’s grandfather, the ancestral Mitchell women and Nic’s friend Thor. I would have liked to see more of the friends known at school as the Weirdos, who are mentioned and help out at the end, but don’t play much role in the story.

The historical massacre of the local indigenous clan is a very dark, but powerful, part of the book. I’m not giving away much here, as it’s hinted at early on.

Despite the serious issues dealt with, there were definite touches of humour, such as Nic’s grandfather’s small herd of cattle, all given girls’ names, but slaughtered anyway to make the sausages he sells at a weekend market and keeps in the freezer, so that at any one time, he and Nic might be eating their way through Denise or Maggie.

I read this very quickly, overnight. It’s not a difficult read. Interestingly, while the characters are fourteen, there isn’t any hint of romance between Nic and Thor. They are mature in their behaviour,  but still just good friends.

Read this if you enjoyed Kate Constable’s Crow Country or Jackie French’s Daughter Of The Regiment. If you haven’t read these, but like time slip fiction, I recommend all three.

Available from Booktopia  Book Depository and Amazon(currently only in Kindle, but keep an eye out.)  ht
Posted by Sue Bursztynski at 3:38 AM

Sounds like an interesting book and one I might read at some time, but right now I only want books that have no message and are pure escapism.

Very few books have no message at all, AJ. My only annoyance is being hit over the head with it, which is why I prefer Tolkien to C.S Lewis. And this one is entertaining enough that I read it very quickly.

True. But in a lot of books the message is a by-product of the GMC rather than a direct message. I often think this is the big difference between literary and genre fiction. Not to say that genre fictino can't have an overt message, it's just less likely to than literary fiction.

Glad I stick to genre fiction like this book, then! 🙂