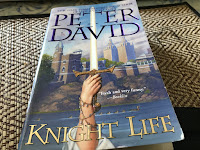 I’ve been discovered plenty of my old books, either on a clean-up at home or on the shelves in my old bedroom. A recent one is Knight Life by Peter David, which I must have brought from home and forgotten about, because it’s the 2002 edition and I left my parents’ home long before that.

Anyway, I found it and took it home and I’ve re-read it!

What do I mean by the 2002 edition? The original version, which I’ve also read, was written in the days of typewriters and was about 30,000 words shorter. The author explains, in his introduction to this edition, that at one stage he was working on a script for a film version that was never made and decided it was out of date and could do with improvement.

If you’re into comics, you will probably have read this author’s work. He has also done several Star Trek novels and scripted some Babylon 5 episodes, including that funny one where the space station gets a merchandise shop which upsets station commander John Sheridan when he realises it’s selling John Sheridan teddy bears(he tosses one out the airlock). But this novel was my first encounter with this author, and I picked it up among a pile of Arthurian themed novels I was reading at the time.

So, what’s it about? King Arthur returns, but not in the way we usually think of it. No galloping out from his sleep with his knights, no returning to save Britain in its darkest days. In fact, at one point, he comments that we could be on the verge of a golden age if we wanted it. And he’s not in Britain either, he’s in New York City, along with Merlin, who escaped from his own cave because he has been living backwards and is now a young boy, so small enough to slip through the cracks. Both of them have managed to keep up to date in their caves, so aren’t completely surprised by what they see.  Now Arthur has to decide what to do with his life. Leading is what he does best. It’s a bit early to be trying for President, so, with Merlin’s help(faking computer records), he decides to stand, as an independent, for Mayor of New York. But he and Merlin aren’t the only ones who have survived into the twenty-first century. There’s Percival the Grail Knight, who has aged, but is still around due to having drunk from the Grail, and makes a good treasurer for the campaign. There is a re-born Guinevere who is a very good personal assistant and press secretary. She has her own problems, though. And there are Morgan and Mordred...

Odd that everyone from Arthur’s time still around is not only living in the US but in the same part of it(the furthest from New York we get is New Jersey), but never mind. I found myself enjoying it all over again and I can’t help wishing that they had made that film after all, because I’d have liked to see Jason Carter, who played that lovely Ranger Marcus Cole in Babylon 5, as Arthur. The description of Arthur certainly sounded like him, but he’s rather too old for the role now.

This isn’t the only novel in which Arthur goes forward in time; Arthur, King, written by another American with screenplay experience, has Arthur chasing Mordred into World War II. While there he meets and falls in love with a British doctor called Jenny... That was much like the Time Machine movie, Time After Time. And he becomes a pilot, learning how to take off, but never getting the hang of landing. That would also have made a good movie, perhaps with Kenneth Branagh as Arthur.

Anyway, both are worth reading, though you may have to get Arthur, King from ABEBooks. Knight Life is easily available from Book Depository, along with Peter David’s other books.
Posted by Sue Bursztynski at 9:03 PM

It's funny, but I've never been a fan of books who take existing characters and put them into a new situation. Or if the tv/movie adaptation is too far away from the books - the most recent being Riverdale (from the Archie comics), The Durrells (from My Family and Other Animals/Birds, Beasts and Relatives and Garden of the Gods) and Anne of Green Gables (from Anne of Green Gables).

Then you’ve missed out on a lot of fantasy fiction! And that’s a shame, because there are some lovely ones out there. 🙂

If I hvaen't read or am familiar with the original it's fine. But if I know the original then I just can't do it - I've tried but I just don't enjoy the new version at all. Dunno why 8(

Each to their own! You’d probably hate the film Time After Time, then, in which H.G Wells actually builds the time machine and has to chase Jack the Ripper into a modern US city. He meets and falls in love with a woman who travels bs k with him(he actually married a woman with the name of that character, but she was his cousin). Malcolm McDowell as Herbert, David Warner in yet ANOTHER villain role and Mary Steenburgen as Amy Robbins. It was great fun!

Hi Sue - I have to say it's not the sort of thing I read ... yet can quite see your comment - each to his own ... and I may well enjoy anon at some stage ... cheers Hilary