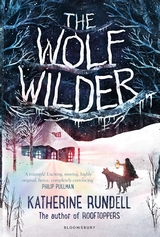 The place: Russia, deep in the forest. The time: deep winter, a few years before the Russian Revolution would change the country forever. We're not given a precise date, only that it happened about a hundred years ago, and hints given in the novel suggest the Tsar is Nicholas II, who had a sick son, and that it's after 1905.

Twelve year old Feodora, known as Feo, lives in the forest with her mother, returning to the wild wolves which have been abandoned by the aristocrats who had kept them as pets and become bored with them. When an insane General destroys their home and arrests her mother, dragging her off to St Petersburg, Feo follows with her much-loved pack of wolves, a newborn wolf pup and a new friend, Ilya, who has been forced to become a soldier(he's under age)when he would much rather be a dancer.

Along the route to save Feo's mother, they make friends among the peasants who are starting to become restless; the General has been oppressing them too, and he represents the Tsar, after all. While the coming Revolution is never mentioned, anyone who is familiar with it will recognise the signs. And yet, the ending is almost fairy tale... I can't tell you any more lest I spoil it.

The author doesn't hesitate to do dreadful things to her characters, but it was a dreadful time, after all, and motivation is needed for the decisions made on Feo's quest.

The language is beautiful and the flavour purest folk tale; I could almost hear a balalaika playing in some scenes, such as when a group of peasants celebrate the arrival of Feo and Ilya. In fact, I could almost imagine Baba Yaga flying through the trees in her mortar and pestle or arriving in her house on chicken legs! It is that kind of vision of Russia.

If I have a nitpick, it was how quickly the villain recovers from having his eye poked out! I just can't imagine it.

Still, it's a great adventure with wolves, which I'm sorry I took so long to get around to reading, and I would recommend it for children from late primary school to early secondary.
Posted by Sue Bursztynski at 11:09 PM

She's does horrible things to her characters, a villain's eye gets poked out, and it's for the MG crowd? I guess this is along the lines of the old fairy tales with witches being put in burning ovens. I have almost all Russian characters in my new novel. It's fun to write about people in a different society from our own. Thanks for the review!:)

Trust me, there are plenty of MG novels with much more violence than this one! But it's got a true villain who represents an administration that is soon to go the way of the dodo and he does what villains do, no sugar coating! Check out Morris Gleitzman's Once series, set in Poland during and after the war; beloved characters die dreadfully, mostly at the hands of the Nazis. It's definitely MG and the kids at my school love it.

The kids at your school love it? I never read stuff like that when I was in Middle School. I read SF and adventures and things. I wonder if kids today are immune to blood and gore due to computer shooter games and the rise of the horror/paranormal TV shows/movies? When I was in Middle School, the scariest thing on TV was Kolchak or Night Gallery. I loved those shows! LOL!

Kolchak and The Night Gallery weren't made for children. And they were scary - at least, The Night Gallery was! Yes, kids, in my experience, love to be freaked out. All those R.L Stine books might not seem too scary to you and me, but for kids, definitely. And the minute they hit secondary school, they look for even more frightening stuff, in the YA books. The Wolf Wilder was not gross enough to give nightmares.

On commission, I wrote a children's book about the history of crime in Australia. I had to be careful about my wording, because you don't want to overdo it for the younger readers, but in the end, I was writing about serial killers and bushrangers who were executed as well as the more humorous stories(such as the April Fools Day robbery and the Dumb and Dumber bank robbers). I have yet to meet a child who read it and didn't love it. And these were true stories. In fiction, they know it's not true.

Some of our students are refugees who have been through far worse than the odd fictional villain having an eye poked out.

I think you and I may have grown up in a more innocent time and place. ;-)