Goodies From The Festival! 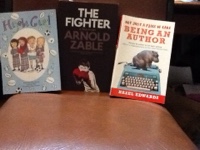 Okay, I bought some print books! I also got a copy of Hazel Edwards's There's A Hippopotamus On Our Roof Eating Cake, for my youngest family member, Jonah. I got one for his cousin Dezzy, when she was about his age, and had both signed. (Dezzy is sixteen and writing American Gothic-style fiction for English Extensions. How time flies!)
I didn't buy Anna Ciddor's book because I have it already, in ebook and in print. Mum is reading the print copy, so I didn't bring it for signing.
Anna and Hazel did a great session this morning, discussing writing books about "different" kids. Hazel said she had ended up having to self publish Hijabi Girl, which she wrote with a Muslim school librarian, who wears the hijab herself and wanted to see kids like her students in books. It was rejected forty-one times and even the festival bookseller didn't have it, though you can buy it online through Bookpod. I gather it has been doing well so far. I bought a copy and will be showing it to our literacy co-ordinator.
Anna said The Family With Two Front Doors was a risk, because it took a long time to write and lowered her writer profile, because, as I know well, if you don't have a new book out NOW you can be forgotten. But she felt it was the book she had to write, for herself, and in the end, Allen and Unwin bought it, after a lot of rejections in which she was told, "Oh, it's lovely, but we won't buy it because it has too limited an audience." Hah! It's only been out this year and it's already into reprint. I can't help thinking if it had been a Holocaust novel it would have been grabbed by the first publisher. But it was about the author's family and they did go through the Holocaust only a few years later, with only three of those delightful children left out of ten, and both parents gone; she wanted one happy moment for them, with the traditions and the food and the family affection. 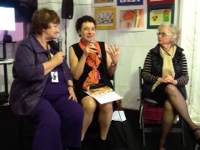 I had three sessions altogether. My next one was my friend Mirna Cicioni doing an interview by Skype with a lady who had translated a lot of stuff from Italian, including Primo Levi, and one English-speaking  author who had moved to Italy and started writing in Italian. One question was - why get someone else to translate your work when you could do it yourself? The reply was that the author "thought in Italian" while writing in that language and it would mess it up. But I bet she would be upset if she thought the translator hadn't done a good job.
Another author mentioned was Elena Ferrante, which is a pen name. Apparently nobody has ever met her or seen her or knows her real name and she only does interviews by email. There is even a theory that "she" is a man, with some ideas of which male author it might be! Now, that sounds like a storyline for a movie! A romantic comedy, perhaps, where the reclusive author has a visit from a young journalist who believes the author is a man, but she isn't and has her own reasons for wanting to be left alone. Maybe she's a famous person who doesn't want anyone to know she's writing a certain kind of fiction? (As in that film Without A Clue, where Dr Watson is the real detective, but has to hire an actor to play Sherlock Holmes because he is after a job he won't get if the administration find out he's doing something so disreputable as solving crime). Anyway, there is a romance... Not that I think that of Elena Ferrante, whoever she/he is!
I spent some time having a cup of tea in the sunshine before my final session. I'd picked up a copy of Arnold Zable's The Fighter. It doesn't read like a typical biography, but then, Arnold Zable doesn't write like that. Very readable so far! I hadn't realised that, at the age of sixty-seven, Henry Nissen is still working on the docks, because his social work just wasn't paying enough to live on. He's still on call, has his mobile with him, in case he is needed. He is a true working class hero - heck, a secular saint!
I might review it when I'm done.
My final session for the day was a panel about Holocaust fiction, which I chose because Kate Forsyth was on it. Of course, she was there because of The Beast's Garden. She spoke of the fairytale background to it and how much research it had taken. When asked why Holocaust fiction, she said that some stories should not be allowed to be forgotten and that it was up to storytellers to make sure they weren't. 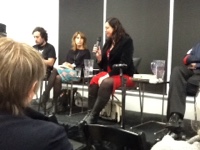 One of the other speakers was an Israeli writer, Nir Baram, who was very polite and kind when someone in the audience asked a question about his new book with a very strange over-the-top interpretation of it. She must have seen his expression, because she said plaintively, "I was reading it at two in the morning!" But he was nice anyway. I'm not sure I want to read it, not my cup of tea, but it sounds like it might be a very popular book. It's his first to be translated into English.
A very enjoyable day, in all!
Posted by Sue Bursztynski at 4:24 AM

Thanks Sue for your thoughtful audience questions during the MJWfestival session on YA liteerature 'Taking Risks,Writing about THEM!" Great to have well read reviewers in an audience.