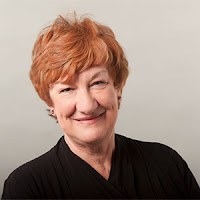 A few years ago, I was at a bookshop signing with Ford Street Publishing. My table mate was Hazel Edwards, a much more famous writer than myself, who actually makes a living from this! Hazel's new book, F2M: The Boy Within, written with young transgender man Ryan Kennedy, had just been published by Ford Street, and a wonderful book it is, too, funny and charming, not one of those "Oh, woe is me, nobody understands me!" novels, and just as much about punk rock as being transgender.

But nearly everyone who approached our table was a huge fan of There's A Hippopotamus On Our Roof, Eating Cake and that, not the new YA novel, was what they wanted signed! Poor Hazel! (Ryan wasn't there that day)

She has done a lot of travelling which in its turn led to books inspired by the travel, using absolutely everything in her life as meat for the writing.

Now Hazel has written her memoir, using something she calls "anecdultery" as its style.

I'll let her tell you about it in the interview questions below. Welcome to The Great Raven, Hazel!


Hazel Edwards’ ‘Not Just a Piece of Cake; Being An Author” (Brolga)

Why did you write this memoir?

It was a new intellectual challenge AND taking a risk hoping the result would be satisfying for the reader too.
Health reasons meant I couldn’t fly for months, so via a memoir, I answered the questions readers often ask of me as an author and mentor. I have been frequently asked about the workstyle process of longterm creativity, especially when you have a family as well.
I had been published since my mid twenties and turned 70 this year, so it seemed timely.

How did you choose the title?

Often writing for children is considered easier, ‘ a piece of cake’ It isn’t. There is a misconception that briefer is less important or less skilled to craft.
A ‘memoir’ is meant to be only a slice of life which fits the cake theme.
To what extent is it a family history?
Slightly. It deals with my father’s legacy of ideas and intriguing ancestors like my paternal Scottish grandmother Agnes.There are  some childhood influences of living in a country general store.

What do you reveal about juggling family life with writing?

·      Candid reality. Ironic humour.  Survival skills like not ironing and birthday gifts of gourmet cooking lessons for males.
·      Risk-taking; physical adventure like Antarctic expeditions or Spirited Women’s Trekking in Nepal but also mental challenges.
·      A few sociological example of attitudes towards working women during the periods of political and educational change in 1970s and post Whitlam era. Being a mature aged student, with a baby and no sleep.

Is it suitable for children to read?
Yes, but it is mainly aimed at nostalgic adults and those interested in writing or leading a creative workstyle.192 of my books are not hippo-centric. Social issues such as others coping successfully with being different, physically, politically or culturally have always interested me. ‘Diversity’ is the current label.

To what extend would it be helpful for new writers?
It is realistic about the risks, plus the time and energy required to develop skills in order to survive longterm as a creator and even as an authorpreneur.
How does your family feel about it?

My husband Garnet has always been supportive of my writing and that’s vital, especially in the beginning. My daughter Kim is my marketing manager who has dragged me into the digital decade (it’s her day job elsewhere too) and my grandsons are ‘yawn-testers’. I’ve co-written two ‘adventurous memoirs’ with my son who wore out two pairs of boots doing the real walking or cycling and my son-in-law helps when I ask him research questions.

What were the greatest challenges?

There was experimenting with a new kind of writing: anecdultery, and formatting in a new style of storytelling. Brolga Publishers’ project manager Wanissa was endlessly patient.
I’m hopeless at manipulating the resolution and size of photos. I left out some because they were in the wrong format.
Getting the tone right in the captions.
Deciding what to include and what to leave out.

You lived through a period of great sociological change in attitudes towards females. How is this shown in your book?
It discusses the impact of PM Whitlam’s funding for mature aged students and the importance of a partner who believed in sharing roles.

Quest+ story The process of finding out as you write. The writer’s journey. ‘Quest’ is my son’s middle name.
What is anecdultery?

What is your next project?

Hijabi Girl is a junior chapter book about a feisty girl who wears a hijab in an Australian mainstream school. It was co-written with a Muslim librarian, Ozge Alkan, who has a hijab and a sense of humour, and illustrated by Serena Geddes. It had 41 rejections from mainstream publishers so I decided to self publish.

Hazel's memoir is a
vailable from Booktopia, here.

It is also available at all good bookshops!

Posted by Sue Bursztynski at 5:56 PM