If you have been following this blog since last year, or if you went with me to the YABBA Awards (yes, you, Thando, Ryan, Selena, Kristen, though poor Dylan missed out that time) you will remember my mention of Graham Davey, the President of YABBA, the Young Australian Best Book Awards, the one the kids get to vote for. I first met him by phone, when I applied for my school to join YABBA. He had been doing this for twenty years, according to the YABBA homepage, as a volunteer. It would have been an enormous job even if he was getting paid for it, but he did it as a volunteer! His day job was as a storyteller, which I can easily imagine him doing with that rich, beautiful voice.

I posted about last year's YABBAs here. It was a wonderful day and when I asked Graham if I could come both as a teacher and a writer, he said of course I could, and there was not only a table for me and a slot in the program, but a beautifully designed slide with my books on it in the presentation.

And a few weeks ago, when I spoke with him on the phone, he told me to check out the video from last year, where there was a snippet of my student Thando speaking. That was thoughtful of him.

I'm only sorry that my students missed out on the YABBAs for so long. This year, I had them nominate books for the short list. "Is Andy Griffiths Australian, Miss?" I said yes, he was,but they had to nominate a book that hadn't won before, and this might be difficult. "Is John Flanagan Australian, Miss?" Yes, I assured young Rakibur, he is. I think one of them nominated something of mine; he shooed me away when I walked past him at the computer. It was to be a surprise. ;-)

The YABBAs will continue and they will be wonderful; that is Graham's legacy. But we'll miss him at these events. We'll miss him a lot.

Damn! We are losing far too many wonderful people! 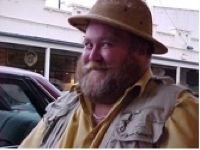 Posted by Sue Bursztynski at 5:26 PM