Introducing Samantha-Ellen Bound, debut novelist, whose children's book What The Raven Saw has come out this year from the Woolshed Press, Random House Australia!

GR: Tell us a little about yourself - your background, your interests, what you do for fun when you're not writing.

SEB: I grew up in Tasmania and moved to Melbourne straight after I finished school. Reading, writing, and creating stories have been a huge part of my life ever since Kindy. My other big love is performing arts – you can often find me on stage pretending to be someone I’m not, or teaching dance. To chill out I love travelling, the beach and any kind of water sport.

GR: I see you've done a Diploma in Publishing and Editing - was there any writing involved? What, actually, DID it involve?

SEB: There was lots of writing involved, but none of it was fiction! The Diploma was all about the ‘other’ side of publishing – the editing, proofing, design, marketing, financial side etc. Basically everything that goes into the creation of a book. I did it because I had an interest in the process of book publishing, and also because I wanted to refine my writing skills with the editing component. The Diploma helped me to wise up about getting my own book published – I knew exactly what to do and where to go and what to expect, and I loved all the guest speakers that would come in every week to talk about all the aspects of book publishing.

GR: Do you feel that either this course or your work as a children's bookseller has helped in your writing? If so, in what way?

SEB:  Absolutely; I didn’t want to be a writer who had written a book and then had no idea what to do next – studying publishing meant I had all the tools to make it easy for myself to get my book out there. And by studying editing I now have a far greater knowledge of how to put a book together, and how to improve my writing. My work as a children’s bookseller has been an inspiration and a great source of knowledge. It really ignited the spark that made me want to get my own book on the shelves.

GR: Where did your idea for What The Raven Saw come from?

SEB:  It was actually rather random – I saw a raven sitting next to a weathervane at my local church and around him this story began to emerge. Some parts of What the Raven Saw were short stories before I tweaked them a bit and put them into the novel. 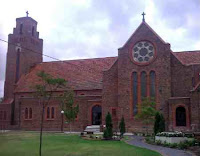 GR: At which age group is this novel aimed - and did you have any beta readers of that age reading it before publication?

SEB: My intent with What the Raven Saw is that readers of all ages can enjoy it – that it has themes, humour and ideas that are universal. All my favourite children’s books have a maturity to them that deepens your appreciation as you get older. But my target audience would be late primary school – the 9-12 age bracket. Yes, my publisher did get primary and teen readers to read it and some schools even did activities based around the story (designing a cover etc), all before Raven came out.

GR: The landscape is very English, with its churchyard and the fields and even a scarecrow (one with an unusual accent!). Where were you imagining when you wrote it?

SEB: I didn’t intend the story to be connected to a particular country or place – it could be anywhere, or any place. You may notice that the characters all have different accents and ways of speaking, and I like this crazy kind of mish-mash. That being said I have spent a lot of time in country Australia, around a lot of lovely old churches, and this probably inspired me a bit. I suppose the setting is rather English but I like that it’s never outright stated where the story is set.

GR: I notice that the chapter names are taken from hymns or other religious songs. What is the thinking behind this?

SEB: The title of each hymn (and if you listen to the songs, also the content) reflects what happens in that chapter, or the mindset of the raven in that chapter. At the start of the book the Raven can only really express emotion though the gospel songs and how they make him feel, so the chapter names reflect that. I love gospel songs myself, and so I really loved that I could incorporate them into the book.

GR: Actually, there are a lot of references to music in the course of the novel. Were you listening to anything in particular as you wrote?

SEB: I love music and have been singing since I was little (sometimes badly), and I think music is an important, fantastic and creative way to express emotion. I hope that comes across in What the Raven Saw. I would listen to the gospel songs or hymns as I wrote the novel (only very quietly though, otherwise I find it too distracting, because I start paying attention to the song rather than what I’m writing!).

GR: There seems to be a solid background to the relationship between the raven and the priest, as if there has been something written about them before, in your short stories, perhaps. Have you ever written about these characters before? If not, would you consider doing it?

SEB: The scenes between the raven and the scarecrow, and the scene with the man in the tree, were both short stories before they were in Raven. The raven and the pigeon also made an appearance in dialogue-writing classes at uni. Obviously I loved the raven character and kept using him! I had never written anything about the priest and the raven before – but I did want them to feel like they were old friends (actually the priest is the raven’s only friend for a very long time!).

GR: Do you have a favourite character? If so, who and why? A favourite scene?

SEB: I really love the raven. When I see a raven in the street now I always watch him to see if he might be my raven. I love that the raven is a mammoth grump but ultimately lovable. But all the characters in What the Raven Saw are very special to me, and they all have qualities that made writing about them a joy. My favourite scene is probably when the raven and the pigeon meet the scarecrow – I think the scarecrow is the character that has the most impact on the raven.

GR: How did you celebrate the sale of your first novel?

SEB:   It’s quite funny; you work so long and hard on one novel, and every few weeks or so there is a new development and it becomes an ongoing process, this sale of your book. And when the publication date finally comes around it kind of feels like just another logical step – although I do keep an eye on my book at work – always face-out!! I think the celebration was more internal – getting a children’s book published has been one of my biggest dreams since Kindergarten, and I was very happy and proud when it was both accepted for publication and then released. It is a great confidence booster that hard work and belief in yourself pays off.

SEB: My second standalone novel is written and being given an edit at the moment. I have just written a short play, How Can We Help, which will be performed at the Essendon Theatre Company in June. But my next project, which I am so excited about, is a children’s series called Silver Shoes – it is set in a dance school called Silver Shoes, and told through the eyes of four of the dancers there – Eleanor, Ashley, Riley and Paige. It is for a mid-primary audience, and all about dancing – not just ballet. I love it because I get to combine two of my biggest loves – writing and dancing.

Thanks for dropping by The Great Raven, Sam-Ellen!

If you would like to follow Samantha-Ellen's blog, she can be found at the Book Grotto
Posted by Sue Bursztynski at 5:10 AM