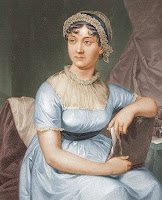 Today is the 200th anniversary of the publication of Jane Austen's Pride And Prejudice. I first read it in Year 12 English. That was also the year I played Lady Bracknell in the school's production of Oscar Wilde's The Importance Of Being Earnest, another classic of English literature and also deliciously silly. I also had to study Persuasion, and since then I've read most of the others (still have to read Mansfield Park, but I'm holding off, because it IS the last) and also started reading Georgette Heyer, because where else can you go after you finish the few books Jane Austen wrote?

There have been dramatisations of all the books at some stage. There was a movie of Persuasion some years ago and Emma and Sense And Sensibility; the others have all turned up on the BBC.  Emma even turned up as the background to the comedy Clueless, set in modern times.

But somehow, I don't think anything has been done quite as often as Pride And Prejudice. There were two TV versions at least - one with David Rintoul as Darcy, the other with the delectable Colin Firth. Laurence Olivier and Greer Garson played the hero and heroine in 1940. That was the movie in which Lady Catherine was actually feeling out Elizabeth's feelings for Darcy instead of threatening her. Apparently the actress was much loved and couldn't be shown in a negative light. Never mind. Laurence Olivier was gorgeous! It was a nice, gentle film, though once the 1995 TV version came along, it slipped to the bottom of my favourites.  It just can't compete with Darcy and the wet shirt...
;-) Anna Chancellor, who played Miss Bingley in the 1995 version, is a many-times grandniece of Jane Austen, and later did a documentary about her. There have been numerous updates, such as Bride And Prejudice, the Bollywood version, which I thought great fun, and the Lydia character is rescued early and punches Wickham on the nose before she leaves. And, of course, there's the Keira Knightley one, which shows Mr Bennet as more of a farmer than a gentleman and ends with the scene where he has just approved Elizabeth's marriage and declares himself at home if anyone comes for his other daughters. There's Lost In Austen, in which a modern Austen fan exchanges places with Elizabeth Bennet and finds that things aren't quite the way they happened in the novel - Wickham, for example, isn't such a villain after all, and helps her out.

There have been novels - sequels, fan fiction, updates, even a New Ceres story in which Mary Bennet runs off with a Time Lord! I have just checked on Fanfiction Net and found 773 hits under Pride And Prejudice. At least one seems to be a Harry Potter story with Snape as Darcy and Hermione as Elizabeth. (wince!)

So why IS this one so popular? I admit it's my own favourite. I love Emma, but in the end, she has to be more or less rescued by her much older boyfriend - and I suspect that Elizabeth Bennet would think Emma was an idiot. This is the one that most lends itself to interpreting and playing with. There's the intelligent but poor girl, a combination that normally wouldn't get her a husband in this era. There's the snooty man who is actually not that bad, as she realises once she meets his family and staff. Both of them make mistakes (and who can forget that bizarre proposal?). There are the family troubles that bring them together. And it's funny!

How could you not love it? I have read and reread this one and never tired of it. If you haven't read it, what are you waiting for? If you have an ebook reader you can download it from Project Gutenberg in a few seconds, or there's always the local library. Go check it out!

Anyone out there got their own favourites? Who else loves this as I do?

Posted by Sue Bursztynski at 3:22 PM