Here are a few book connections before the holy days are quite over. It's not Easter any more, but it's still Passover.


We'll start with the Haggadah. It's the book you use at the Passover Seder, the family meal you have at the very beginning of Passover. It's full of prayers and stories about the exodus from Egypt and of discussions by Rabbis many Passovers ago. And songs! As you might expect of a book that has been around so long, there are some wonderfully decorated editions. There is, for example, the Sarajevo Haggadah: 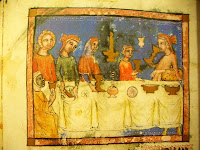 Gorgeous, isn't it?I think this may be the picture mentioned in Geraldine Brooks' novel People Of The Book.  From what I hear, this book was saved from the Nazis by a brave Muslim librarian.

People Of The Book is a wonderful novel to read if you're interested in history. books, preservation of books and forensics. It reminds me just a little of James A.Michener's The Source, which was written in the same layered style, with objects and the stories behind them, all centred around a single place. In his case, it was an archaeological dig at a place called Makor. This one is about an Australian book conservator called to Sarajevo to work on the Haggadah. She is a forensic scientist in her own right, working out from such things as wine stains who has handled the book in the past. And as she works on it, we learn the background of each bit found in the book, going back to when it was originally decorated for a family.  Beautiful book!

Howard Fast wrote a book about the young manhood of Moses. His novel is set in the Egypt of Rameses II, who had literally dozens of children by all his wives and concubines. His sister Queen, Enekhas-Amun, has no children and was only too pleased to find a baby floating on the river. She is secretly a worshipper of Aten and she and a priest friend are hoping to bring back the cult of Aten, thrown out after Akhenaten died. Moses has been brought up to be more than just a standard prince. The book shows him growing up, learning a lot about himself and others, seeing his mother's hopes dashed and people he cares about killed and finally leaving Egypt with his faithful servant Nun  by his side. There was supposed to be a sequel, but the closest the author came was a novelette set on the last day of his life, many years later, and was really about Joshua, whose father Nun left Egypt with Moses at the end of the novel.

There's a novelette by Thomas Mann which I unearthed as part of a collection called The Ten Commandments. Most of the stories in the book were about how the Nazis broke every one of the Commandments, but this one was about Moses himself. It was very funny and touching, as Thomas Mann's Biblical fiction tended to be. In this one, Moses actually is the son of Pharaoh's daughter, who grabs an attractive Hebrew slave she sees in the garden one afternoon (the poor boy is killed soon after). So when, many years ago, he returns to Egypt to save his father's people, Pharaoh doesn't have him summarily executed because he knows Moses is his grandson and that his daughter will kick up a huge fuss if he does. He even sits patiently, trying to keep a straight face while Aaron does his magic trick with the snake (a technique involving making the snake stiffen for a while). I have no idea if it has ever been reprinted, but it's worth reading. 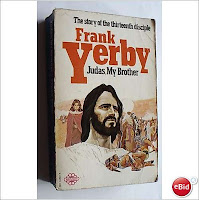 There's a book I read while I was at high school. Frank Yerby's Judas, My Brother was one of a lot of historical romances he wrote over the years. I loved Frank Yerby, still do. Okay, despite all the historical research he did, the books didn't always get it right. I re-read The Saracen Blade as an adult, long after my teens, and when I had actually studied mediaeval history, and found a LOT of details he got wrong, no matter how many historical notes he gave.

This novel has an entire thick chunk of footnotes at the end. Did he get it right? I don't know - but it was a very entertaining book. His hero, Nathan, is like many other Yerby heroes - rich, intelligent, a serial lover who falls in love with one woman after another. Yerby's way was to have about three women. One dies, one lets him down, then dies,  one he marries and lives happily ever after.

But Nathan is just that bit different. When he's thirteen, he meets a boy his own age, one Yeshu'a ben Yosef, and the two find out that they look a lot like each other. The years go by.  Nathan gets into a lot of trouble, comes home to settle down and meets Yeshu'a again. He ends up marrying Yeshu'a's sister, Yohannah, so the connection is even closer. Yeshu'a firmly believes he's the Messiah. Nathan, who adores his brother-in-law, doesn't. He is there at all the miracles, which aren't really all that miraculous. They aren't faked, they just aren't miraculous. In this novel, Mary Magdalene is a respectable landowner with mental illness which Yeshu'a heals; the prostitute is someone else.

I liked it, but then I'm not "of the Nazarene persuasion" so if others find it offensive, I apologise.
Posted by Sue Bursztynski at 8:59 PM