A Different Kind Of Book - Cookbooks!

I have a confession to make: I'm addicted to cookbooks.

"Who isn't?" you may ask. They're so colouiful and mouthwatering to look at.  But you're never going to make all those recipes, unless you're that lady who cooked her way through Julia Child's book and blogged about it...

Well, yes, all that's true. My sister has gotten rid of all her cookbooks and now finds any recipes she wants on-line. Actually, she admits to an addiction to recipe blogs.

I see her point. It saves space in the cupboard and it's true you're never going to cook all those things. I mean - red braised duck with plums? Quail stuffed with this or that? (I won't even EAT quail - a schoolfriend of mine used to keep them as pets).

But when I find a recipe I like, I make it and type it up on my computer, so I have them all in one file and can look up favourites without having to hunt it up.

And meanwhile, while going on-line is fine for a specific recipe you want, how you you get ideas from it?

Right now, I'm drooling over a Women's Weekly Christmas cookbook and a Good Taste magazine with Christmas recipes in it. Christmas isn't actually my holiday, but there is plenty in there you can use any time.

Last year I made chocolates for gifts, using moulds I bought in a convenient el cheapo homewares shop. I experimented and didn't use either cookbooks or on-line help. This time, I'm playing with truffles. I admit I got some recipes for those on-line - good heavens, just type "chocolate truffle recipe" into Google and you get 1,350,000 hits and it's everything from the elegant ganache-based ones you have after your dinner party to the condensed milk ones suitable for kids to make (and very nice indeed - just so you know, my students made and sold enough truffles to make $65 in profit as their donation to Greenpeace). 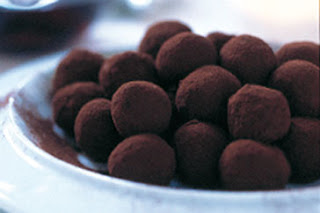 But can you really wade your way through that many recipes?

It took a hard-copy book to suggest something that hadn't occurred to me: why not make a chocolate coating for your truffles? I'm going to try that this weekend. It warned not to make the coating too hot or risk melting the truffles. I'll let you know how it works out.

The home economics teacher at my first school swore by the Women's Weekly cookbooks. They have recipes even kids can make, under supervision, among the adult ones. They're well laid out. They have a good glossary at the back, explaining some of the more unusual ingredients.

This one that I'm drooling over (I really must try some of the ice cream recipes) actually tells you not to worry if you don't have the exact amount of, say, cream - one carton this size will do - saving you buying two cartons and wondering what to do with the rest, a real problem for me; I still have a packet of cardamom I bought a while back for one recipe with "two teaspoons of cardamom". I don't have an ice cream maker, so it was nice to find a cookbook that says, "If you don't have an ice cream maker, here's what to do instead."

And then there are the more exotic cookbooks. Some years ago, I bought the Death By Chocolate cookbook, which has in it a recipe for chocolate peanut choc chip cookies, utterly decadent, easy to make and not as expensive as you might think, given how many biscuits you get out of it. 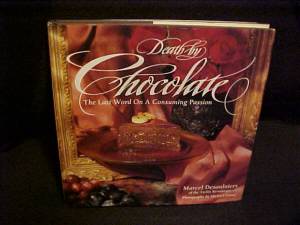 That said, I also collect recipes from the sides of packets - my nicest banana cake recipe came from a packet of house brand flour.

Yet there are even cookbooks based on recipes from the sides of food packets!

In the library I found a cookbook with recipes from the ancient world. I have since tried out some of them. One of them, involving a kind of pancake from ancient Greece, my Greek library technician told me was still made. She herself makes it. Wow!

Another one a Queensland friend sent me was about mediaeval holidays and festivals, which, apart from the fun of cooking mediaeval (my friend and I agreed that perhaps it was a bit much, nowadays, to waste a bunch of roses on rose petal bread), is useful for me as a writer, as reference material. I could possibly have found some of this on-line, but not curled up and absorbed it, knowing the person who wrote the book is an expert in this area.

The Ritz Guides (discovered in one of those discount book shops I mentioned on the Dog) are fun and I have made some wonderful family holiday breakfasts using the Ritz guide to breakfast, able to assure everyone that this is how they make Irish soda bread and decadent hot chocolate at the London Ritz.

Mmm, I'm going off to have a special breakfast right now...

Posted by Sue Bursztynski at 12:56 PM

I think it's true that there are heaps of people who are obsessed with cookbooks. Myself being one of them. Maybe it's a kind of wish fulfillment...buying books in the hope that you'll try some of the recipes some day. There are just so many of them around that it's hard to know which one to get! I always find the Women's Weekly ones really easy and taste great.

I've been known to buy the Women's Weekly itself, near the end of the year, just to get the recipes. My mother keeps hers, torn from the magazine, in a jar, and still has an old WW one for rum balls. I typed it up.

I usually check out a book before buying. If it's mostly gourmet stuff, I don't bother. I do want to MAKE something from it. If a book has "Easy" or "Quick" or "On A Budget" in the title I'll at least look at it. Sometimes the titles are deceptive, eh? ;-)
I still have my old school cookbook - no pictures to make you drool, just simple recipes kids can make in the home eco classroom (we only did it in Year 8 back then) but it has measurements and explains the tools and once in a while I do still use it.