What I'm re-reading: Sword At Sunset 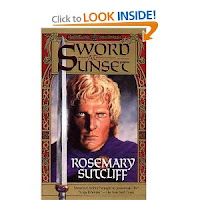 After all the stuff I have been saying about Rosemary Sutcliff, I felt in the mood. I went to my overflowing bookcases in my lovely but messy study and found my Tor Publishing copy of this book, with the American spelling. For quite some years you could only get the abridged version which left out the gay lovers and Artos and Guenhumara's wedding night, when he finally gets it that his half-sister Ygerna has really damaged him. It was meant for kids to read, but really, it made me scratch my head when I was near the end and Artos is stressed out because he's only once been more than half a man to her, he says when he finds her with Bedwyr. The author, when interviewed, said that she had met kids who had read and loved the full version.

It's set three days after the end of The Lantern Bearers, but it's Aquila's son, Flavian, who appears in most of this book. A beautiful, beautiful novel. You feel so strongly for Artos - and it was the first time I'd read an Arthurian novel told by Arthur, though since then there has been Parke Godwin's fabulous Firelord.

There have been others, wonderful others, but Sword At Sunset is my favourite.There are some books you just know you will have to read over and over again.

My student who has just finished The Lantern Bearers agreed it was wonderful, but he will now have to wait for next year for this one, unless he can find it in the Sunshine Library. After that I might wave the books of Mary Stewart and maybe Jack Whyte under his nose. Parke Godwin later.

Meanwhile, I will curl up with Artos the Bear and his friends at bedtime tonight. Lovely!
Posted by Sue Bursztynski at 8:51 PM