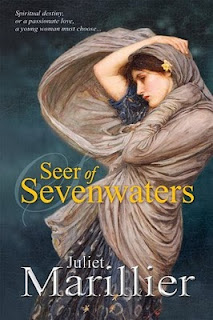 
Seer of Sevenwaters is about Sibeal, a girl committed to becoming a druid. Before her final vows she travelled to the northen island of Inis Eala to spend some time with her sisters. An unusual storm sinks a ship and there are only three survivors, one of which she stumbled across. He is an amnesiac with no name that the other survivors knew. Sibeal names him Ardal and he's fighting for his life.

The island community discovers that there is something strange about the shipwreck survivors. Strange things happen and secrets unravel. Sibeal is drawn into a perilous quest and has to face a decision that may break her heart. Spiritual life or love?

It's the fifth book of a series. I have read the first three before this one, but for those who haven't, there is a family tree that may help you along.

First of all, the front cover and the blurb drew me in. I liked the prologue. It went straight to the action. The way the author wrote it was so that the first chapter is fairly interesting, but then after that it keeps getting better and bigger. I liked how it sort of got a little twisted and out of control. The lies of some of the characters, the secrets and each time I flipped to the next page, it was what kept it rolling.

The good thing was that the author showed the amnesiac's point of view as well, because the reader had a bit of an idea about his struggle to stay alive, the things that happened to him when to one else was there which was added clues. Some of the clues the author gave were a bit obvious but the major ones were much harder to decipher.

The author kept to the point and didn't wander off into anything else, which was one of the things I enjoyed. To me, the ending was perfect, though a little bit predictable considering what the main characters had gone
through.

The book wasn't confusing at all, the language was proper and was very descriptive. I thoroughly enjoyed the book and sympathised with Ardal the amnesiac. It's a book worth re-reading.

If I were to rate it, I'd rate it four and a half stars.
Posted by Sue Bursztynski at 5:13 PM