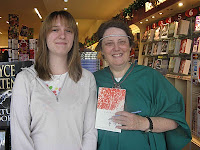 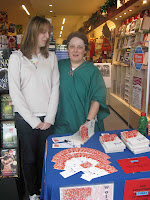 I organised this months ago, with Alice, the lovely lady who arranged the mass-event for Ford Street. It could have gone better than just a few copies, given that it was Christmas and a teen paranormal book and I was in costume – but it was still a nice day.

I arrived very early and parked my stuff in the back room. Alice told me that, as I’d explained why I couldn’t get any books from the publisher (they’d run out – gloat!) her boss had kindly agreed to let me have the needed copies for my launch for 25% discount.

Last night, I sat up late, watching a guilty-pleasure DVD and sewing myself a new kaftan to use for today and my launch. I embroidered it just a little around the neck, as it was already getting late, but I thought it would be nice to wear a costume. Alice said that was fine – they’d had another writer come dressed as a dog! I experimented with wearing a cloak and a veil and ended up just putting a silver cord around my head. That worked okay. I wore my silver Cyndi Smith wolf’s-head brooch – a gorgeous piece of jewellery which I commissioned her at Aussiecon, as a birthday gift to myself.

In the end, I gave away a lot more bookmarks – including Crime Time bookmarks – than I sold books, but never mind. I talked with people, I was friendly and perhaps they will come back for a copy. I signed quite a few for the shop – they had bought an embarrassingly large number of copies – and asked if they might put some in the paranormal. YA is good, but paranormal teen is also good – even better. So you cover two places and have two chances to sell..

Best of all today, I got to meet Romy of Lost In Stories blog (here we are in a photo) and her delightful parents, who took the trouble to come and support me. Romy offered to take some bookmarks (signed, of course) to use for a give-away on her web site and I also gave her several Crime Time bookmarks. It will work well there. It has occurred to me that, apart from Tina and Dylan, I’m fairly sure that most of my regular readers are older than Romy’s – and Dylan is my student, Tina found me through Romy. So when I do my next bit – a “cast Wolfborn the movie” competition, I might ask Romy if she’d like to run it on her site as well.

That’s for later. Meanwhile, it was fun to meet her – thanks for coming, Romy!
Posted by Sue Bursztynski at 3:32 AM

Awww thanks Sue, that's okay it was great to finally meet you! How did the book signing go after I left? I'm sure you did well, you were in a great position. The "cast Wolfborn the movie” competition sounds like fun, I'd be happy to help. I'm just typing up my blog post for today's book signing, I'll be posting it up tomorrow. Romy :)