Four Queens. A divided nation. A ruthless pickpocket. A noble messenger. And the murders that unite them.

Seventeen-year-old Keralie Corrington is one of Quadara's most skilled thieves, but when she steals an unexpectedly valuable package from a messenger she is soon entangled in a conspiracy that leads to all four of Quadara's queens being murdered.

With no other choices and on the run from her former employer, Keralie teams up with Varin Bollt, the Eonist messenger she stole from, and together they race to discover who has killed the queens. But when dark secrets threaten their reluctant partnership and put everything at stake, Keralie and Varin must use all their daring to stay alive and untangle the mysteries behind the nation's four dead queens. 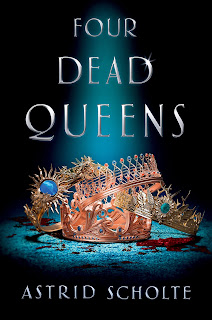 So, what do you do when something fishy is going on and the only person you can - possibly - trust to solve it with you is the very person whom you have robbed?

Quadara is a former kingdom now split into quadrants and ruled by four Queens. The rules are very strict for these women. They have to make every effort to give birth to a daughter by the time they turn 45. This daughter is then taken away to her quadrant and raised by adoptive parents while being prepared to rule one day. Sons go to their fathers. If there is no female heir, the closest female relative is chosen. And once she becomes a Queen, she is not allowed to return home, in fact she isn’t allowed to even leave the palace. Forget love - there is no consort, there are “matching balls” where the rulers get to meet a potential mate. After he has done his job, he leaves. The idea is for nobody to favour their own quadrant over the others. It started hundreds of years ago with four young widows of the late king, who made a firm set of Queenly laws and stuck to them.

Until now. Each Queen of the current crop has at least one Deep Dark Secret. And one by one, over a few days, they are bumped off.

Each quadrant is different. Archia grows food but is low tech. Toria is the trading centre, which has some technology. The Ludists enjoy dressing well and partying. Eonia is the most technologically advanced of all, but you really wouldn’t want to live there, for reasons Varin explains to Keralie. You just wouldn’t! I’ll let you discover why for yourself, because spoilers.

Keralie is the daughter of a sailing family, but hated sailing enough to do something that wasn’t intended to harm her father, but did. Now she is desperate to save him; she is hoping that there might be a reward for the information she has found, but it isn’t that simple...

I read this over a couple of days. It was a highly entertaining read. I enjoy murder mysteries anyway, but having one in a fantastical universe made it even more interesting. I liked that it was one which couldn’t take place in our world. That’s all I will say of this, because again spoilers.

There was an interesting twist towards the end.

And that cover, with the four crowns on it, is delightful, especially the Eonist crown with its DNA double helix decorations!

Some things didn’t quite work for me.

The worldbuilding was not bad, but I have to say, I’m not sure I can swallow all of it. I needed to suspend disbelief at the notion that the Queendom would have lasted so long without someone rebelling or trying to take over. I would have thought there would be more in the way of trade arrangements between the quadrants than there is. There is a reason for some of it, for example the Queen of Archia refusing to allow electricity in her quadrant, because it might spoil the environment. There is certainly some restlessness among those people who know it exists but have to ride around in carriages and use lamps for light. But nobody has sneaked anything in, or started a revolt.

And given that there doesn’t seem to be a unified army, just a bunch of palace guards, what would happen if someone from outside tried to invade?

But it’s well worth a read, an exiting ride right to the end - I read it speedily.

This novel would suit a senior secondary school library.

Available in all good bookshops and online. The author lives in Melbourne, but it’s also available outside Australia.

Posted by Sue Bursztynski at 9:25 PM

The world building sounds elaborate and imaginative. I guess that it sometimes goes with the territory that such an elaborate description of a fanciful political and social situation might include elements that seem unrealistic.

I agree that the cover art is outstanding.

Agreed, Brian! Sometimes you just have to suspend disbelief. And, yes, that cover is stunning, isn’t it?

Ooh, it does sound good, Sue. I'll have to make a note of it!

I hope you enjoy it! It’s being launched in Melbourne this week, by Amie Kaufman.