This morning I went to Reading’s in Hawthorn for the launch of 52 Mondays, by Anna Ciddor. I’ve already read and reviewed it, here. Anna was there with her family, daughter, daughter-in-law, grandchildren and her husband, Gary, with whom I once went to school. Gary was pleased to see me and we had a chat. We discussed the research Anna had to do for her last book, The Family With Teo Front Doors, which was set in a Jewish community in pre-war Poland. He said there had been some interesting problems with talking to ultra-Orthodox Jews, because there are so many different groups, all of whom do things differently. In the end, there were some things she just had to make up and hope she got them right. 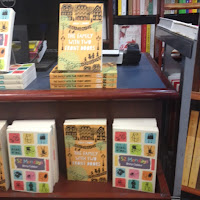 Her granddaughter Amalie was handing out party squeakers for everyone to blow when the book was officially launched. Because it’s a children’s book and has a birthday party in it, the bookshop was set up as a children’s party, with little party cups of sweets, Twisties, fairy bread, and Fanta to drink. There were balloons up too.

When the launch began, there was an intro by her publisher, Susannah Chambers, and a teacher librarian from MLC, the private girls’ school up the road(she read “telegrams” by students who had read and loved the book). Then Anna got up to do her part. 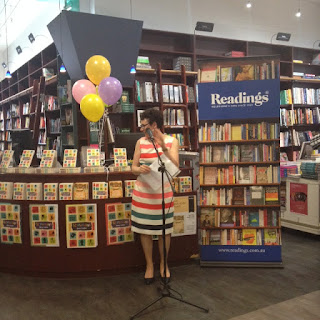 She invited everyone to think of where they had had breakfast this morning, what they had eaten and how breakfast was prepared... then spoke of a breakfast scene in the book and described, in great detail, what breakfast in the 1960s would have been like, equipment not as good as today’s, milk delivered by horse and cart and birds picking through the foil lids to get at the cream!

When she finished, inviting us all to have some of the party stuff they had taken such trouble to set up, everyone blew their squeakers. It was a cheery launch and there were more children than I usually  see at these events. When I lined up to get my book signed, a lady approached me to say she went to school with me. Amazing how many people from my school years remember my face! We talked a bit and she expressed interest in my book Crime Time for one of her younger family members. I did tell her she would have to order it in, as bookshops didn’t stock it these days. She asked carefully about just how gruesome it was. I said, “This is a children’s book!” Which it is. It’s just gruesome enough for kids to say happily, “Oh, yuk!” but not enough to give them bad dreams.

I got my book signed - the usual “Thanks for your support!” I get from every single writer who knows me, and whose work I have reviewed - and said my farewells before departing. It was a warm day today - despite the season chang, it still feels like summer!

Posted by Sue Bursztynski at 3:18 AM

Hi Sue - I imagine many of us would learn a great deal from the book - as your earlier post mentioned ... it sounds an ideal book to introduce children to our recent history ... so glad it went well - and you had fun meeting old friends and supporting Anna ... cheers Hilary

Hi Hilary! Yes, it was a pleasant morning. Well, I lived through that time, and I’ve written a couple of short stories for kids set in that time and I still had to do my research. So yes, always something to learn.

Hi Sue, Thanks for your post. Lots of interesting details to bring the scene to life :-) It was lovely to have you there joining in the celebrations. Anna

That sounds like a wonderful book event! and lots of fun for the kids, no doubt, with the squeakers. :) Glad it was so nice! And how fun you got to see familiar faces as well.

Have a lovely week Sue!

Thanks, Greg, it was fun!

Hi, Anna! I enjoyed it very much, thanks for inviting me!

What an amazing book launch! I wouldn't have the courage to have that but I admire the author. So good to hear how much fun it was.

Hi Jacqui! I’m sure Anna would appreciate that. If you write for kids, or teach, you become comfortable speaking in public, and a lot of the people there were family, friends or friends of friends. I have had book launches at my school as an excuse to give my students a chance to enjoy some things other, wealthier kids at middle class schools had, and really, it’s not hard to arrange, you just need to put a bit of effort in.

... And judging by your profile, you’re a teacher AND an author. So a bit of public speaking and organisation shouldn’t be too much for you. 😏

Hi to all of you, and thank you for your lovely comments. When I decided to have a book launch I just knew it had to be a nostalgic kids' party to match the spirit of the story. It was fun writing the book, going back on a memory trip to my childhood, and it was equally fun bringing it to life for the launch!

We had fun too, Anna!

A book launch should be a party I think. It's lovely how you do support so many authors, Sue.

They’re my friends. And some have supported me too.