A Great Escape: An interview with Felice Arena! 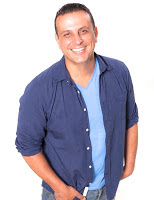 Felice Arena is the award winning author of many children’s books, including the Specky McGee books and several other series. A few years ago, he was interviewed on this blog by some of my students, who had studied Specky McGee in Literature Circles.

In recent years he has started writing historical fiction for children. The latest is the wonderful A Great Escape, set in Germany immediately after the Berlin Wall went up. The hero, Peter, is stranded on the East German side while his parents and little sister are on the West German side, split as were many other families in this era. I couldn't help thinking of North and South Korea, where split families finally got to meet again a while ago.

Felice has kindly agreed to be interviewed about his new book, which I enjoyed very much and which will almost certainly make it into next year’s CBCA and YABBA lists!

Take it away, Felice!

GR: This is your third piece of historical fiction for children. The first one, The Boy and The Spy, was set in wartime Sicily, the second, Fearless Frederic, was set in Paris in 1910, during a flood, this one is set in Berlin at the very beginning of the Berlin Wall. Why did you choose these particular times and places in history to write about? (Each seems to be a time in history when something dramatic was happening!)

FA: This might sound strange – perhaps a little out there – but I believe that characters and stories choose their writers. Well, they do for me. With The Boy and the Spy, a simple conversation with my parents about my mother’s uncle who had a friend who was an orphan boy during the Second World War led to that character calling out to me: “Write my story!”

A visit to Paris a couple of years ago, during a flood in that city, led Frederic to me and his adventure in Fearless Frederic. And as for Peter in A Great Escape… he sought me out not via my past travels to Berlin but my chats with my German neighbour here in Melbourne.

In the previous answer I mentioned my German neighbour. He’s 76 years old and grew up in Berlin. And, he was also a guard on the wall! What are the chances!? (I did not find this out until I was about to write the story). He naturally turned out to be a fantastic resource while writing this book. Plus, there is so much documentation about the Berlin Wall online, and as a result the research was a little easier than it had been for learning about Fearless Frederic’s world of 1910. It’s modern history. People affected by the Berlin Wall are still very much alive today. I also got to talk with my Berlin friends and get their perspective on it.


GR: Each of your three historical novels has a strong, intelligent girl to interact with the hero. Elke is certainly smart and brave. What did you have in mind when you created her - and the other two girls in your novels?

FA: Generally, the protagonists in my books tend to be boys, only because I see myself in these characters. As for strong, intelligent girls in my books, I’ve been blessed to have strong women in my life – and I always want to represent and reflect them in my female characters – like Elke, Simonetta, and Claire.

GR: You have certainly proved that it’s possible for an author to move between genres - sports fiction, humour, adventure, historical fiction, picture books. Is there something you particularly enjoy about trying a new type of fiction?

FA: We all want to feel we’re evolving in whatever work we do. My love for travel and history and movement in my stories has always been there. I just haven’t really had the opportunity to write stories like these until now. Saying that, if you’d go back to my sports books, like Specky Magee, the dynamics and emotional layers of how kids relate to each other have always, I think, been the common denominators in my stories. Only the backdrops have changed.

GR: Are you thinking of doing some more historical fiction? If so, does any particular era appeal to you?

FA: Yes. I’m thinking something closer to home. But I’m waiting for that character and his/her story to find me. There’s a boy calling me from St. Kilda at the moment. I might just have to find a quiet spot to reflect and daydream and see what he has to say.

I absolutely loved writing the Sporty Kids series for beginner readers. I’ve also gotten so much joy out of presenting to that age group in schools that it’s prompted me to write a new series for the little ones.
The first two books in that series is due for publication early next year. More details can be found at my website: www.felicearena.com  or over at my Instagram account: www.instagram.com/fleech

And congratulations on your CBCA long listing for Fearless Frederic!

FA: Thank you. It’s a real thrill and an honour!

A Great Escape is now available at all good bookshops in Australia and on line, at Booktopia, or in ebook. His previous historical novels The Boy And The Spy and Fearless Frederic are both available on Book Depository. If you live outside Australia and want to read this new book, be patient! It will be released soon.

Posted by Sue Bursztynski at 12:47 AM

Great interview. The plot of The Great Escspe seems unique for s children’s book. It is particularly interesting interesting how these stories “find” authors. I have heard similar sentiments expressed by several writers. .

It’s certainly an interesting idea for a children’s story! And it doesn’t mess around - we are told exactly what happened to people who tried to flee to the west and got caught!

Glad you enjoyed it, AJ! It’s nice that he writes such a wide variety of stories, something for everyone,

I don't even understand how I stopped up here, however I assumed this post
was once good. I don't recognise who you are but definitely you're going to
a well-known blogger when you aren't already.
Cheers!

Thank you. Depends which blogs you normally follow. This one has been around for several years.

Nice blog! Is your theme custom made or did you download it from
somewhere? A design like yours with a few simple adjustements would really make my blog shine.

Please let me know where you got your design. Many thanks

This is Blogger. The theme is one of a number of choices in the Blogger settings. In order to use this you need a Google profile, which has a ver6 easy to create. The advantage of this is that you can comment on any Blogger blog, and give your name. How about it? And how about signing next time instead of commenting without saying who you are? 🙂

Good info and right to the point. I don't know if this is in fact the best place to
ask but do you folks have any thoughts on where
to hire some professional writers? Thx :)

Hi Nonny - have to call you something since you are STILL not giving a name. There are no “folks”, just me, and you’re right this is not the right place to ask about ghost writers. I’m sure there are web sites which will give you that information. Not this one, sorry!

This is the last post of yours I will publish till you, a. get a Google account with a name attached and b. make a comment relevant to the post. I am only accepting anonymous comments till the end of April, to help me with the A to Z Challenge.