Recently, I received an invitation from David Jesson, of A Back Of The Envelope Calculation, to participate in the Mystery Blogger Award. This was set up by Okoto Enigma(Enigma/Mystery, get it?) to recognise fabulous blogs and bloggers.  Thanks, David! We've only met recently, during the A to Z Challenge, so it's nice of you to have checked out my posts. 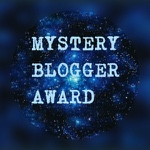 “Mystery Blogger Award” is an award for amazing bloggers with ingenious posts. Their blog not only captivates; it inspires and motivates. They are one of the best out there, and they deserve every recognition they get. This award is also for bloggers who find fun and inspiration in blogging; and they do it with so much love and passion"

My nominees were chosen mainly from my Blogger dashboard, with a few I had to subscribe to because they will insist on posting on Wordpress! I have a lot more favourites than these, but these are chosen from among the ones who post at least semi-regularly, whose blogs I've read a few times this year and whom I think aren't too dignified to participate! Some other favourite blogs, such as The History Girls, are multi-player blogs. There are others I love which just don't post very often.

So, here are my nominees:

1. Lexa Cain blog - for a weekly cheerful chat about her "small blessings", usually about writing and sometimes about domestic issues, but always fun.

5. Sharon's Shells, Tales And Sails - Sharon- for delight in whatever is her subject matter whenever she is posting

6. Pamelibrarian - Pamela - for passion about the young adult books she reviews. She loves them or she hates them, you always know it and why.

8. Lecture Toute Une Aventure - Isabelle, a Belgian blogger who mostly writes her reviews of paranormal romance in English and shares her enthusiasm for them. (When she does review in French, well, I can read it, if slowly)

10. Redwood's Medical Edge - Jordyn, an emergency room nurse who writes novels and provides a great and fascinating resource on this blog for anyone who wants to hurt their hero.

You are not committed to respond to this, but if you do decide to have a go, the rules are below.

1. Put the award logo on your blog.
2. List the rules.
3. Thank whoever nominated you and link to their blog.
4. Mention the creator of the award (Okoto Enigma) and provide a link as well.
5. Tell your readers 3 things about yourself.
6. Nominate roughly 10 – 20 people for this award.
7. Notify your nominees by commenting on their blogs.
8. Ask your nominees five questions.
9. Share a link to your best/favorite post that you’ve written.

Three things about me:

My birth certificate has the wrong date on it. True! I was researching for a book and thought it might be fun to look up a newspaper front page for my date of birth, September 3. But I know I was born on a Friday - Mum had to go to hospital in a bakery van delivering challah for the Sabbath because public transport was closed for the weekend, and Dad, returning from the army, had to hitch a ride to hospital for the same reason. But the year I was born September 3 was a Thursday.

I used to be a member of the SCA, and was hit on the head quite a lot while trying, unsuccessfully, to learn how to fight. I did learn enough to help in my fantasy writing. You can still find my device on line under the heading "Gwenddydd Rhosyn", my Society name.

I wrote my first stories in my sister's old school exercise books, in the space above her tiny handwriting and in any blank bits left over.

1. You are HG Wells’ Timetraveller, attempting to restart civilisation in the far future: what one book would you take with you to help?  (ebook readers not allowed!).

I think I'd probably take a book that is comfort reading for me rather than a handbook of Civilisation For Dummies because, let's face it, the Eloi are frustratingly dimwitted and the Morlocks might just eat me before I succeed. A few tools, yes, things that won't break down too easily or need electricity. Actually, I might consider sneaking in an extra book, A Connecticut Yankee In King Arthur's Court, which does make some Civilisation For Dummies suggestions.

Book first, usually, but it won't stop me from seeing a film based on a book I haven't got around to reading yet, eg Bladerunner, which is a classic in its own right.

3. Following on from the previous question, has an adaptation ever ruined the original for you to such a point that you couldn’t read/watch the original anymore?

Not quite, but if I hadn't already read and loved The Dark Is Rising by Susan Cooper, several times, the film version would certainly have put me off ever reading it! What a horrible film! Americanisation of an English hero and a beautiful English story set in a magical Buckinghamshire,  and university Professor and archaeologist Merriman Lyon,  who is really the Merlin of legend, being reduced to someone's not too bright butler, and the dignified Old Ones asking the teenage Will Stanton(or Will Stenton, as he pronounces it in the film)for advice. It's what the Harry Potter movies might have been like if J.K Rowling hadn't stood firm. I really can't understand why, with so many wonderful stories of their own, U.S. film producers think it's necessary to appropriate  other people's, or think their U.S. audiences are stupid enough not to be able to appreciate other people's stories.

Both and neither. I share a glass of beer with my mother when we go out for dinner and sometimes have a glass of white wine when I dine out on my own or with friends. At home, it's strictly liqueur, usually Cointreau, and not often. A bottle lasts me a year.

5. What was the last book that you read that made you say “[insert favoured cuss], I wish *I’d* written that”?

Kate Forsyth's Bitter Greens, her version of Rapunzel, centred around the author of the fairytale in seventeenth century France, in which the witch holding Rapunzel had been an artist's model for Titian and you do get to see it from her viewpoint as well. Damn, that's good!

My best/favourite post? Heck, there are over 1300 posts on The Great Raven! How do I choose? Well, I'm rather fond of this one, though it's not my most popular. It's entitled "You know you've been reading too much YA paranormal romance when..."

And finally, here are some ...

2. You have been offered your choice of place, money no object, fictional place is fine, to write your book. Where is it?

3. Which three fictional characters would you invite to your New Year's Eve celebration? Why?

5. Reincarnation exists! What will you be reborn as? Or, who would you like to have been in a previous life?(Doesn't have to be someone famous. For example, you might want to have been a cat in ancient Egypt, they had a great life and people could get into huge trouble for killing them)
Posted by Sue Bursztynski at 10:15 PM

Thank you a lot for thinking about me!

You're welcome! You do have a lovely blog, even if I don't comment on it much.

Thanks very much! I'm so glad you enjoy dropping by my blog. I read your responses and I can't believe you were an SCA member. So was I! My "name" was Miranda MacMuir. (Can't believe I remember that after 30 years and I forget everything else!) I designed and made my own Medieval and Renaissance costumes. I learned to wear armor and fight too, but they also taught us fencing and I enjoyed that more. Thanks again for the terrific award! :)

I learned fighting too, but I wasn't much good at it. I did learn enough to help me with my fiction. Do you remember your device? Mine is still up on line, two silver unicorn heads facing each other, a crescent moon and a bar, on a green field. I made my costumes, but only by hand, very basic ones, because I never learned how to use a machine. My embroidery was much better!

Glad to nominate you!

Three books? I would pick: The Poisonwood Bible, The Help, and The Stand, and ... why just three?

Best movie adaptation: Tie between The Exorcist and Silence of the Lambs

Thanks for your suggestions, Tamarac! Well, these are desert island books, after all. They are what you hope you'll have with you if you're ever shipwrecked.