Confessions Of A History Nut!

Okay, I admit it - I love my history books. I don't care much what kind. I go browsing in discount book shops, where you'll find the biggest variety of history books, and get them cheap. I have stacks of history-of books, everything from tourism to chocolate.
My history of the Roman Games tells me that Christians getting thrown to the lions, etc, was probably happening at lunchtime, when the rich people had gone home for a snack and everyone else was hanging on to their seats so they could be there in the afternoon for the good stuff, the gladiators. I keep imagining a family arguing over the last olives and hard boiled eggs while below someone was screaming as they were killed.
The history of tourism had a chapter on the White Ship disaster, which wiped out a lot of the young nobles of England, including the heir to the throne, because someone had supplied the crew with booze, and they steered the ship on to the rocks. History would have been so different if a bunch of sailors hadn't got drunk one night in the twelfth century...
It all comes in handy for writing research. In fact, a teacher at school gave me his old pile of dusty Penguin histories and one of them was Ur Of The Chaldees, Leonard Woolley's account of his excavation, which I used for a children's book on archaeology.
For quite some time I was buying biographies of Tolkien and C.S. Lewis. Why did I need so many? I don't know, but I just couldn't resist yet another cover photo of either of them.
I'll read anything by Simon Schama, and he does quite a lot of different eras and countries.
And then there have been all those highly entertaining popular histories of England and Scotland by Alison Weir. I know there are people who disagree with her, but she is so enjoyable! I just won't read her book about the Princes in the Tower, because she thinks Richard dunnit! And I don't read her recent fiction because I suspect I would be disappointed. I just like her non fiction, okay?
Recently I got hold of a copy of Gareth Russell's new book, Young and Damned And Fair, his bio of Catherine Howard. I follow his blog, Confessions Of A Ci Devant. He doesn't post often, but it's worth reading when he does.
He is almost forensic - and convincing - in the way he examines the evidence. In fact, I'd love to see him try his hand at fiction, specifically crime fiction. The book took him several years to write, unlike popular historians who seem to pop out a boom a year.
Who would have thought you could write so much about a young girl who went from Hanry VIII's trophy wife to meat on the block in under two years? Yet he can and does. There is so much background, and you need it all to work out what went wrong. You need to know about her family, for starters, beginning with her loser of a father, who did some stupid things early in his life, such as defeating the king in a tournament when the others were letting the egomaniac win. So they got jobs at court and he... didn't - ever again. And that had an effect on family income. You need to know about her dreadful uncle, the Duke of Norfolk, and her grandmother, who really should never have been put in charge of a houseful of teenage girls.
Russell doesn't subscribe to the recent theory that Catherine was sexually abused as a young girl. She did make some stupid mistakes, but she didn't deserve what happened to her.
And dear me, wasn't Henry horrible! He had played tennis the day Anne Boleyn got the chop and on the day Catherine met her Maker(with considerable dignity, according to a man who watched it), he was off somewhere planning a banquet. A man of ego indeed.
We don't even know exactly which of the pictures supposed to be of her was really her. There is a whole chapter at the end, diagnosing the lot, explaining why this one or that couldn't have been her and which just might be.
After finishing it, I was hankering for more history, so I got this! 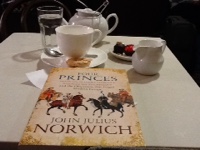 It's about Henry VIII, Francis I of France, Emperor Charles V and Sultan Suleyman, who were all born within a few years of each other. I only bought it yesterday, when shopping for the school library, but am enjoying it so far. It's much lighter in style than Russell, more like the chatty Simon Schama style.
I'm already learning things. I'm sure you knew that before New York there was New Amsterdam, but did you know that before New Amsterdam there was New Angouleme on Manhattan Island? I didn't!
And Louis XII said of Francis, in French, "That big lad is going to ruin everything." He didn't, by the way, though he was not good with money. He was a patron of the arts and writing and he started the system of collecting copies of anything published locally, as we still do today with our national libraries.
I am looking forward to reading more of this!
Time to curl up in bed with my new book.
Do you enjoy history? What kind?
Posted by Sue Bursztynski at 4:29 AM