Second Sale For The Year - rejoice!

Last year I realised suddenly that for the first time in ages I hadn't sold anything - not one book or story the whole year. My writing income last year was entirely from royałties - and I have had some very nice royalties from my education titles  - and lending rights, in which I receive some money from each of my books in libraries. Sooner or later those fizzle out as your books are stolen, weeded or simply not returned from the library and they go out of print. But I get around $4000 a year from lending rights at the moment.
I decided it was time to go back to non-fiction. Short non-fiction, as it's very hard to sell non-fiction trade books these days and the education publishers have their own stables of writers and aren't interested. One education publisher I won't name, which is still making $$$$ a year from a couple of my titles - I know this, because so am I, in royalties - basically told me to get lost. My former primary school publisher left and her replacement has just not been interested, even when I pointed out that the company was doing nicely from my books and they could also do well with new ones.
I have a friend working for them and have asked him to let me know when this guy leaves. Meanwhile, what could I do to be published again?
Well, there was a wonderful market to which I had sold many articles over the years, the NSW School Magazine, which last year celebrated its centenary year. It has a lot of big name writers who have graduated from there, and some who are still selling to it. But when I got into the fiction I stopped submitting for quite a while, though they did sometimes ask permission to reprint something - which is fine with me as, once I've had something published,  I focus on my next piece. I haven't resubmitted anything published, ever. And once they actually commissioned an article, on forensics.
So, what to submit? Well, last year astronaut John Glenn died at the grand old age of 95. And that was sad, especially for someone like me, who has always been a lover of things space-related. But there was unlikely to be anyone rise offering to write for them about this man, who was in at the beginning of the space program and then came back as an old man, cheekily offering to go to space to check out what happens to older people in space. And good on him! It's a wonderful story and this was the time to tell it.
So I emailed the editor to suggest it and he said he'd be happy to take a look at it. I've found that with non-fiction, if the publisher likes the idea, you're halfway there. Things can go wrong, of course, and have gone wrong for me - like the time when the publisher loved the idea, the acquisitions committee loved it, but Ashton Scholastic didn't.  If you can't get their backing, forget about it. Book Club pays for a lot of children's books. But on the whole, if the publisher likes it, all you need is to write it well.
And I had to take my chances. I did my research, on line mostly, as there is surprisingly little print stuff about John Glenn. I ordered his memoir from Dymock's and watched, fascinated, on the Aussiepost web site, as it made its way from somewhere in NSW to Melbourne. It actually stopped in West Sunshine, near where I work, but I was on holiday. It finally arrived on my doormat and I settled downto  read. I bought The Astronaut Wives Club in ebook, and that was great too! It said things Glenn left out of his memoir, oh, yes! Not that I used them in a piece for children. Besides, this was to be an exciting story about a boy who dreamed of flight and grew up to fly not only planes, but a spaceship.
I finally finished my third draft in late January and sent it off soon after I got back to work. Despite the technology of today, quite a few publishers prefer you to submit your work by snail mail. They can avoid the nuisance of printing out the whole slush pile before distributing it.  School Magazine is one of them. Also, their guidelines tell you to expect a wait of about four months. They get a lot of slush. And you aren't supposed to send them more than one or two at a time. Okay, I thought, I'll do something else while I wait, and if the answer is yes, I will see if I can sell the something else.
And the answer was yes, today! I'm celebrating with a pizza supper I didn't prepare myself, and after I get home I'm going to do the business side of it - find the file( they want that, now that they have accepted the piece)and prepare an invoice, I'm getting $600 for my 2000 word piece! Not much for a journalist, but for me, very nice indeed.
This is my second sale for the year, though, as the first was a reprint of my story about Chang and Eng, the Siamese Twins.
Here it is, my contributor's copy - I'm on page 10, followed by a conjoined twins piece by the amazing Geoffrey McSkimming. 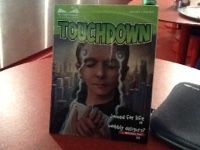 This comment came from Hilary Melton-Butcher, but I accidentally deleted it:

Well done Sue - sounds good ... but that chap needs to get his butt out of the door and let you have your space back ... all the best and congratulations - cheers Hilary