The Castle In The Sea(Quest of the Sunfish#2) by Mardi McConnochie. Sydney: Allen and Unwin, 2017 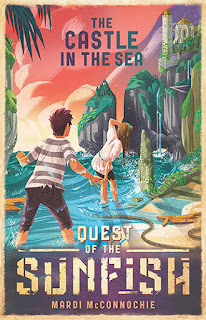 In a post-climate change world, four children, siblings Will and Annalie and their friends Essie and Pod, are sailing on a small boat, the Sunfish, accompanied by their parrot Graham, who can think as well as speak, due to a special computer chip. Annalie and Will are searching for their father Spinner, a scientist who is on the run from the organisation that pretty much runs the world, the Admiralty. He was part of a team that was doing work on a device that could wipe out what is left of the world, in the wrong hands. In fact, the original version did more or less wipe out the world, causing an event called the Flood about forty years before the first novel begins. Various countries are still struggling back from the brink.

Spinner and his comrades divided up the data and went into separate - secret - exile. In the first book of this series, Spinner had to leave his children with only a few coded clues - and now they, too, are on the run from a former team member who represents the Admiralty. Without all the data, the Admiralty can't use the scientists' work.

The castle in the sea of the title is only a small part of the story, in which Essie and Will, flung overboard during a storm, are washed up on an island with an abandoned castle on it. There is no explanation for the castle or who lived there; there is just enough useful equipment left behind to help them as they learn to survive as castaways, while they build a raft. Both children learn and develop as characters while on the island.

It also gives an excuse to divide up the characters for separate adventures as Will and Essie build their raft and go searching for the others and Pod and Annalie take their half-wrecked boat to be fixed by pirates.

The characters have certainly grown since the first book, Escape To The Moon Islands. Annalie is still the smartest of them, but Essie, her schoolfriend who came along for the ride, is beginning to show a strength she didn't know she had before. When she has to learn new things -as when she and Will are together on the island - she does.

Pod,  a former slave whom the others found stranded on a rock after being thrown away by his pirate masters, has also developed. When he issues a warning, an "I have a bad feeling about this!" statement, he's usually right. Not that the others always listen.

The novel's world is fascinating. It has developed out of the climate change events, into a new lot of societies. There are pirates and entire communities living at sea. One country has built a giant dyke and canals, and is recovering well. There is plenty of technology - everyone seems to have a kind of cross between a tablet and a smartphone, called a shell.

And the problem isn't just the climate change - the warming in one country, Brundisi, led to drought, so the government tried the "Collodius" device and that started the worldwide flood. I liked that idea.

On the whole, though, if your older children just want a good, action-packed adventure with strong, interesting characters, this will do them nicely.

Suitable for readers from about eleven or twelve up.

Find it in all good bookshops, or check out the Allen and Unwin web site.

Posted by Sue Bursztynski at 4:45 AM

Hi Sue - looks like a great read for the youngsters ... lots of imaginative ideas ... cheers Hilary

Yes, in a couple of years perhaps my eight year old nephew Eden might like it. Right now, though he's about three years ahead in his reading skills, he prefers over-the-top humorous to adventure.