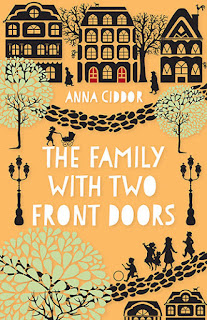 I confess I bought this in ebook on Thursday because I forgot the date of the launch at the Jewish Museum(thought it was later in the month) and missed out. It didn't take long to read, so here are some thoughts. It's not a formal review, but a formal review would really have said the same things in less chatty language.

The place is Lublin in Poland, the time the 1920s. The large, joyous Rabinovitch family, based on the family of the author's grandmother, have to spread out across two ground floor apartments because there are nine children and Papa is a rabbi, who needs an office where he can advise members of the community who come to him for help.

The entire novel is centred around preparations for the wedding of fifteen year old Adina, the eldest daughter(but not oldest child - the oldest son, Aaron is seventeen and already married!).

To be honest, not a lot happens. The family prepares for the September wedding and meanwhile, the girls cook and clean and look after younger siblings, prepare amazingly delicious meals for the Sabbath and go on the odd picnic.

But when you think of it, not a lot happens in Little Women either; Meg, Jo, Beth and Amy work, play, go to school(Amy), write, produce little plays for their own amusement, go on picnics, take the advice of their wise Marmee and generally live their daily life as the daughters of a minister off at the American Civil War. Somehow, it managed to become a classic and be filmed several times anyway. And Anna Ciddor's web site suggests that she had in mind Laura Ingalls Wilder's Little House series.

On another blog, I read Susan Price's description of the very elaborate mediaeval year and what people had to do to cope with the fact that there was a "hungry" period when you literally almost ran out of food. But the folk of the Middle Ages were organised - very organised. They managed.

And so are the women of the Rabinovitch family. Imagine having to prepare the equivalent of a dinner party every single week, not only for the family but for any random strangers Dad might bring home from the synagogue service on Friday night. These people might have come from out of town and couldn't travel on Sabbath, so a family would offer them dinner,  next day's lunch and a place to sleep meanwhile. So, a weekly dinner party(don't forget the dishes!) and, on the holy days, a feast for the extended family! And more dishes. And a house to clean and you absolutely have to make sure that there isn't anything un-kosher allowed into the house. Two lots of dishes to wash in two separate sinks...

Organisation is the keyword here; even today, a religious household needs it and I remember a member of my librarianship class, when I was studying at RMIT, a religious Jewish woman who ran her Orthodox household, cooked, cleaned, did all the observances and still managed to come top of the year in what has to be the toughest course of study I have ever done! She didn't see what the fuss was about; it was just what she did. It may go some way, though, to explaining why she was able to get all her studies done and end up with first place.

I think my mother would enjoy this book, if I can get hold of a print copy at some stage. Some of her memories are very close to the stories in this book, though her family was not quite as religious as the one in The Family With Two Front Doors. She told me long ago about the bakery where she was sent to collect her mother's challah and chulent(a yummy slow-cooked casserole of beans, vegetables and meat, cooked overnight so that religious families can have a hot lunch without breaking the rules about lighting a fire on the Sabbath), as the heroine, Nomi, does in this novel. The bakery had a better oven for the purposes of baking bread and slow-cooking chulent. And random visitors every week and the bath in the kitchen... She told me about her family's summers on the farm(in Mum's case, in the company of their huge, cuddly German Shepherd dogs); in Family, there isn't time to do this because of the wedding frenzy, so the children go to the farm for a picnic instead.

Somehow, every one of the nine children has a personality, though the story is told from the viewpoints of only two, Nomi and her younger brother Yakov. There is a charming drawing of the family at the front of the book, along with some internal illustrations in each chapter, drawn by the author who, it seems, is a bit like Gabrielle Wang in this respect!

Did I mention the food? I really don't care for Eastern European food in general, which is too fatty and heavy for our climate, but it's impossible to read this without a watering mouth - and in my case, a reason for a watering mouth, since I've tasted quite a lot of that food. I must admit, we don't actually stuff the fish in my family or extended family; I always wondered why the name gefilte(stuffed) fish was applied to white rissoles of minced fish with carrots on top. And my mother's kugel, a noodle dish with raisins in it, doesn't have any chicken fat and never had any, even before she discovered what fat can do to you and started preparing healthier food; vegetarians, if not vegans, can eat it safely. But the dishes are familiar.  Ooh, that calf's-foot jelly! With a bit of salt and lemon, a feast for a king!  I haven't tasted that in years. I can imagine some restaurant doing a Babette's Feast or Big Night event based on this novel.

The only sad thing about reading it was thinking of the fact that it's set only about fifteen years before the Holocaust would sweep away the world of this delightful family forever - and most of the family itself - as it did for my parents' families. Sure enough, there was an author's note at the end, in which we learned that only three of the children survived, her grandmother and two of her sisters.

Still - with Purim coming up next week, all we can say is "They tried to kill us, we survived, let's eat!" (I've booked a ticket for a Purim Spiel happening not far from where I live, my very first, though I know about them)

Posted by Sue Bursztynski at 5:58 PM

Sue, I love this blog filled with so much warmth, understanding and appreciation. Thank you!

So glad you liked it! You do get other mentions on this blog and here's a link to a review I wrote some years ago on January Magazine.

Wow! What a cool review. How can I lure you into a review of my book or an author interview? (There are some Jewish cooking references in my book, too, that might make your mouth water...a bit about Mother's cookbook and receipts from the kosher butcher.) Mostly it's a romp through the mementos and the life of my late mother, an Auntie Mame-like character who had a bajillion friends and inspired many with her joie-de-vivre, optimism, and sassy quips. It's entitled PEARL's Party...and you're invited.

Billie, how about you read my guidelines first? If you still think you're a good fit for this blog, email me. :-)
Cheers!
Sue

Great! I did...and I'm not in the children's category (yet). I am planning several more books, and one of them is a picture book with 100+ year old photos of my family. I'll try to remember you when the time comes. Thanks for your consideration.
Billie

I'll look forward to hearing from you then.

This looks like a wonderful book, and your review of it is great! I will have to check it out.

You should be able to get it on line or in ebook. I hope you enjoy it as much as I did!

Hi all! Thanks for the lovely comments.
Just letting you know The Family with Two Front Doors print edition was published in the US this year, and is also distributed in the UK. So although the first publication was in Australia it should now be available wherever you are based. It is even being translated and published in Poland in a year or so!

That’s wonderful, Anna! I’ll add this to my C post. It’s nice to know that your courage in taking all that time working on it has paid off!