Today, March 28, is the seventh birthday of one Eden Pearl, my nephew Mark's older boy. Today he will be celebrating with his parents and grandparents and tomorrow with his friends.

For his birthday gift I've said it with books. A passionate reader, he has begun reading and enjoying A Series Of Unfortunate Events by Lemony Snicket(pseudonym for American author Daniel Handler), only the first novel so far, so I bought him the next two in the series. Because his brother Jonah is only four and doesn't understand yet that you get gifts on your own birthday I've bought him the classic Possum Magic by Mem Fox.

Eden is also a passionate chess player and as there wasn't much positive to report about This Day In History and no authors of any interest to him or to me, I thought I'd just show him and you this. 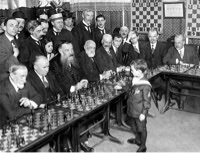 It shows an eight year old boy, Sammy Reshevsky, playing against a whole lot of adults at once, in 1920. He was from Poland, but his family moved to the U.S. to give him the chance to get ahead in the field. Apparently, while he did very well, became famous and won championships, he never did give up his day job. Still, it's an impressive picture and I thought my young chess champion might enjoy it.

And since his current reading interest is A Series Of Unfortunate Events, I thought I'd add a bit about the author.

Daniel Handler, aka Lemony Snicket, has also written for adults, under his own name. Not that this matters when he can give so much pleasure to children, but still...

Of more interest is that he has played in a couple of bands on his piano accordion, and Eden's "Ipa" Gary also plays piano accordion(he was playing it, in our kitchen, the first time I saw him, when he started going out with my sister). The children call him Ipa because when his first grandchild Dezzy was born he wanted to be Grandpa and she couldn't pronounce that. So Ipa it remains. He will be pleased to hear he has something in common with an author Eden likes!

A very happy birthday, Eden, from your adoring Auntie Sue!

Posted by Sue Bursztynski at 4:04 PM