Despite the Northern Hemisphere  date above this post, it's March 8 here Down Under. Trust me on this.

As I haven't had the time or energy or even help to decorate my school library, I thought I might make today's post a tribute to women writers. Feel free to post your own favourites in the comments section.

Even in writing, a career you'd think would be equal, not requiring physical strength(except, perhaps staying up late to meet deadlines), there has been inequality. Remember Currer, Ellis and Acton Bell? Otherwise known as Charlotte, Emily and Anne Bronte. Between you and me, I can't see how anyone could possibly have mistaken Wuthering Heights or Jane Eyre for anything written by a man, but then, I wasn't around at the time. 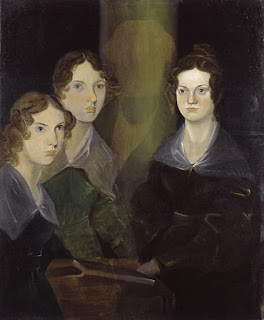 There's that scene in Blackadder 3 in which Edmund Blackadder, the Prince Regent's butler, is talking to his sidekick Baldrick about his epic novel, Edmund: A Butler's Tale, which he sent to Samuel Johnson under the pseudonym of Gertrude Perkins, because everybody is doing it; Jane Austen is a great big Yorkshireman with a beard like a rhododendron bush, according to Edmund. He tells Baldrick that the only real female writer around is Boswell "and that's only because she wants to get into Johnson's britches."

You can see the joke here, a tribute to this matter of women having to write under male pen names. You'd think it was over by now, but no, not completely. Even in my own area of children's/YA fiction - in fact, especially - there are some women having to hide their female identities to get boys reading their books - at least, that's what their publishers tell them. I don't recall hearing about boys giving up the Harry Potter books after it turned out that J.K Rowling was Joanne. But that was why her name was written the way it is. And you know what? The only takers for Tamora Pierce's books at my school have been boys. And yes, Garth Nix's Old Kingdom books were written by a man, and it has been only boys, so far, whom I could persuade to read the adventures of his strong heroines. Not a single female borrowed of Sabriel, Lirael and Abhorsen.

But I'm wondering how many kids these days know that S.E Hinton was a Susan? The books aren't as popular now as when they were written, at least not in my school, but I make sure I tell the few kids who do borrow them that they were written by a teenage girl.

Lately, I suspect anyone who writes with initials of being female, though it isn't always the case.

Even in a female dominated industry like children's writing, there are plenty of men. And yes, there are some wonderful male writers who can write from a female viewpoint. Off the top of my head, I'd suggest Will Kostakis's Loathing Lola, Garth Nix's Old Kingdom heroines and Sean Williams' Jump, Crash and Fall . But if anyone makes them write under female names in this genre, I haven't heard of it. (Romance is different, of course; I believe there are some male romance novelists writing under female names)

It's a bit like teaching: there are both male and female, but in a female-dominated career, guess who mostly gets to be in charge? Not that there aren't some amazing male primary teachers; my brother-in-law is the best I've ever known. And guess what? He was a Principal for a while too, but dropped it and went back to the classroom, telling me he only got to see the children when they had been naughty. The kids are what he's there for; he wasn't going to spend his career doing paperwork and discipline. He's back in the classroom and happy.

So, who are a few female children's writers I enjoy? Please forgive me if you are a writer and left out, I just want to name a few who come to mind. I'll probably remember more when I've finished posting.

In no special order...

Gabrielle Wang, who writes gentle fantasies for middle-grade readers. We do have a set of A Ghost In My Suitcase in our Literature Circles sets, and the kids have done very well with this one. There is an interview one group of students did with Gabrielle on this website, and it's in the free ebook as well.

Marianne De Pierres, whom I first met at the Aussiecon writer's workshop years ago, who has done a wonderful YA SF series starting with Burn Bright. That one is for good readers only, but well worth reading.It's about an island where anyone over 18 disappears, but meanwhile parties hard. I knew two girls who said they were fine with that, as long as they got in all that partying. There's an interview on this site with Marianne too.

Rebecca Lim, author of the series about Mercy, a fallen angel who is being hidden by the non fallen angels and does a Quantum Leap thing into various mortal bodies, one in each novel. The girls at my school simply love this series! And I tell them Rebecca lives right here in Melbourne. Nice!

These are all Aussie writers, but my favourite from overseas is Susan Cooper, who is still writing beautiful historical fantasy, long after the end of her classic Dark Is Rising series.

Let's celebrate women writers! Raise your glass in a toast with me!
Posted by Sue Bursztynski at 4:22 PM

Thanks for the shout-out, Sue!

Hope you had a happy International Women's Day :)

You're welcome, Kate! Only true. :-) Well, I was at work and my only students yesterday were Year 7 boys, so I didn't have much chance to celebrate, but never mind. This post was my tribute.