Finishing My Reread... The Secret Adversary By Agatha Christie 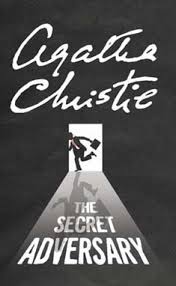 This is the first Tommy and Tuppence novel. Tommy and Tuppence are a couple who have adventures and solve mysteries together. In this first one, they have just met again after the Great War. Both of them are out of work and Tuppence is considering going home to her large family, though not keen on the idea. They get the idea of starting up a business called the Young Adventurers, advertise and suddenly find themselves in the middle of an adventure involving secret papers that must NOT be allowed to get into the hands of the enemy, an American millionaire looking for his missing cousin, a survivor of the Lusitania, a femme fatale and the elusive Mr Brown...

I think Agatha Christie let her hair down with this one and had fun. It's not a whodunnit, just a thriller/adventure, with a lot of humour. I enjoy it every time. I have to keep reminding myself that the book was published in 1922 and the "roaring twenties" were just beginning. There's a photo of my grandmother as a young woman, that must have been taken maybe a few years before and she definitely doesn't look like the liberated woman Tuppence is. She has a long coat and a big-brimmed hat and I think her dress, under the coat, must have been just above her ankles at best. What a difference a few years made!

One thing I wonder is - why didn't Alfred Hitchcock turn The Secret Adversary into a movie? It would have made a great Hitchcock!

What do you think?
Posted by Sue Bursztynski at 3:05 PM

A Hitchcock film - I like your thinking! I came to Secret Adversary rather late and had already read other T&T by that time. My first taste was Partners in Crime, which is quite clever with the central conceit that each story is written in the style of another writer. The old man in the corner was on the list for years as a result of the story in this book! I never got round to watching the recent adaptation of Secret Adversary, but I really wasn't at all sure about the casting: David Walliams was not obvious as Tommy and I felt that both he and Jessica Raine were too old for the parts they were playing...


@breakerofthings from
A Back of the Envelope Calculation

Thanks, David, I'd forgotten about the TV series. I saw a bit of that episode. Not very good, not faithful yo the original, and in it, Tommy and Tuppence are already married with children, which may be why the actors were rather too old for that story.

I do have Partners In Crime, must reread it - I hadn't realised that about other writers' styles! The Tommy And Tuppence stories are so very different from the other stories.