The Beatles In Melbourne - Writing About It

Fifty years ago this weekend, the Beatles were in Melbourne. That is certainly something to celebrate. I've been to the exhibition at the Melbourne Arts Centre and it's great! I do recommend it to anyone in Melbourne over the next few weeks.

A couple of years ago, I was invited to submit a piece of historical fiction to Ford Street's new anthology, Trust Me Too. I'd already done a story set in 1969 on the day of the moon landing for the first anthology, so I decided that this, too, would be set in the 1960s. The question was - when? It needed to be centred around an important event, to give me a framework in which to tell the story. So much was happening that it was just a choice of which event. 1967, for example, was a big year in history. In Australia alone there was the referendum on Aboriginal rights. In February that year, Ronald Ryan was hanged, the last person in Australia to be executed. At the end of the year, PM Harold Holt disappeared, his body never found, leading to all sets of conspiracy theories. But the disappearance of a politician wasn't really of importance to anyone in their teens, the execution horrible and the referendum was huge, too huge for me to do all the necessary research in the time - and, not being indigenous myself, how could I know how they felt?

In the end, my friend Edwina Harvey made the suggestion I used. "How about the Beatles visit?" That happened in 1964. It would work well.

I wanted a heroine affected in one way or the other by the visit. She was to be a huge fan, but not one of those who fainted and screamed and had to be carried off to the first aid station.  I couldn't, just couldn't, see things from the viewpoint of such a fan. Instead, I made her a young musician still at high school, a drummer who admired Ringo Starr.

I decided that the story would centre around the matter of Jimmie Nicol.  Jimmie Nicol was a drummer, a session musician hired by the band to cover Ringo, who was in hospital at the time. He did a lot of the tour, but by the time they got to Melbourne Ringo was better and joined his band mates and Jimmie was surplus to requirements. The saddest photo I've seen was one of him alone at Essendon Airport, where he had been taken and dumped hastily as soon as Ringo arrived. Oh, he was well paid - well enough to have a go at his own band( it didn't work out). But it's a sad ending to the excitement for him. And, you know, he could have cashed in on his time with the Beatles, with interviews and such, but, from what I read, refused to do so.

Thing is, I had never heard of him before I started doing background research for my short story. And suddenly I had my story outline: my young heroine had been invited to play with a band at school, it's two weeks before the school dance, and she's been told that the drummer she was replacing is coming back. Not very subtle but what the heck! It worked.

I read and read. I looked at pictures, mostly from the Sun(now the Herald Sun), though there were also some impressive ones in the Age, of fainting girls being carried off by mounted policemen. The Sun had a lot more human interest stories in it and when you're writing fiction, you need that. There was a picture of a thrilled hairdresser clutching shorn Beatle locks, and another of two girls kissing a less than thrilled Beatle. I went on YouTube and watched bits of the concert, muffled in the sounds of young women screaming. I read, online some personal accounts of people who remembered the event and had gone to see it.  One young woman was sacked because her boss saw her, somehow, among the thousands on TV!

I wrote about the crowds outside the Southern Cross Hotel, where they were staying, and I inserted my brother-in-law, as a young music teacher from my heroine's school. Gary was there, after all, though somewhat younger. 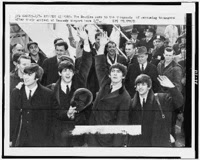 Posted by Sue Bursztynski at 4:43 AM

What a great time it would have been to be alive! I'm not really a Beatles fan but I feel terrible for the drummer who was replaced.

Oddly enough, I wasn't a fan then, but have discovered them over the years. Their music will live as long as music is played. It can be played by a rock band or a symphony orchestra.

It was perhaps more exciting than anyone might wish and not a tie to be Indigenous or female or a young man of 20. The Vietnam war was about to start. There was talk of conscription. Women couldn't be on juries in Victoria. Married omen had to resign from a lot of jobs. I read all this in the old newspapers, including letters to the editor. I was too young at the time, of course, to know about any of this.