Today is my sister Mary's birthday, so I went online to see what happened "on this day" and who was born(apart from Mary, of course). Mary is a writer, though these days mostly articles. She did get a third place in the Scarlet Stiletto Awards some years ago for a very Roald Dahl-style crime story called "Chivas Regal And Me". And because this is a book blog, I thought I'd see if there were many writing-themed events On This Day. Alas, no. I did find the usual battles and killings, the excuse for World War I(assassination of the Archduke Ferdinand), the coronation of Edward IV and the premiere of the ballet Giselle by the Paris Opera Ballet(I saw them when they were in Melbourne years ago - it was a birthday gift from my sister's friend). Well, there have been a lot of books written about all those topics, many of them fiction. Scott Westerfeld wrote a trilogy of Steampunk novels about an alternative WWI with the adventures of a son of Archduke Ferdinand and a girl who had disguised herself as a boy to get into the English flying corps(GM whales). Edward IV has been in fiction since the time of Shakespeare! Giselle has characters out of folklore, the Wilis.

Birthdays? Well, there was the playwright Pirandello, very famous, but I'm not familiar with his work, alas!

There was also Peter Paul Rubens, the artist who painted pictures of large women, such as this one, The Judgement Of Paris(Image from Creative Commons), thus coining the term "Rubeneque". 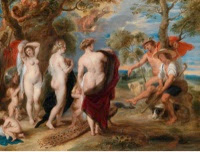 Well, in his time, he was passionately into music and poetry, I suppose. Pity about the wives, the treatment of his daughters and the  politics.

There was Richard Rodgers in 1902, the wonderful composer of all those musicals, seen in this Creative Commons image with Irving Berlin, his partner Oscar Hammerstein II and choreographer Helen Tamiris. 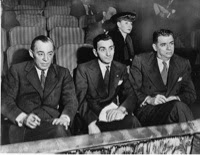 There's also the wonderful Mel Brooks, creator of so much amazing comedy, but I couldn't find a Creative Commons image of him and don't want to be sued, so just check him up on Google Images.
Posted by Sue Bursztynski at 8:41 PM