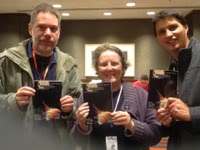 I had to get up at the same time as I do to go to work today, because I was doing my first panel at 9.00 am, a " Meet The YA Author" event, where I was to interview my old friends Edwina Harvey and George Ivanoff and the delightful Ambelin Kwaymullina(watch this spot for an interview with her which I will put together in the next few days). Well, we had an audience. It was Jake, the son of Dirk Flinthart, ASIMite and writer and musician. Jake had the choice of going to a panel on YA with us or listening to his Dad speak for the millionth time. He chose us. As he was the only one, we made it informal, invited him to the panel table to share our sweets and water and just talked. Jake said he didn't care for YA books whose authors clearly didn't remember what it was like to be a teenager, so generally preferred adult books, although he just reads what is on his parents' shelves and anything that works for him, adult or YA, was fine. I was a bit surprised when he said he'd been forced at school to read Tomorrow When The War Began which, at one time, was a bestseller among boys and girls alike. I gess nothing is fun if you have to read it.I invited Edwina, George and Ambelin to talk about their books, and what was behind them and was very interested to hear how much science was behind Ambelin's universe in The Interrogation Of Ashala Wolf. She has a background in environmental science. Jake was quite interested in reading her book by the end and told his Dad he had enjoyed it.

After the panel I was going to get a takeaway tea and help out on the ASIM table, but was lured away to a kaffeeklatsche with Ambelin, so I had my tea, but not takeaway. It was Iron Goddess, which I chose   because in the Phryne Fisher novels it's the favourite of Phryne's boyfriend Lin Chung. Interesting, but not hot enough for me to get the taste properly.

I went back to the ASIM table and, while helping Simon Petrie, got my copies of 59 and - Ta Da! - 60. In the picture above, you will see me flanked by two of my contributors, Paul Hughan(the bearded gentleman) and Kiwi Dan Rabarts. Wish I'd thought to grab a pic with the wonderful Lewis Morley,who did my internals. Tomorrow. Terry Morris, who's now a member of the ASIM Association, came along with her husband Hung and offered to do some time on the table in the afternoon. It was lovely to see her.

Twelve o'clock I went off to the GoH speech by Jim Hines, which was short, but very enjoyable, and stopped to get my programme signed and tell him the ASIM table was around, because he wrote three stories for us, including his first Goblin story(he's since gone on to do a lot more in that universe). I sat at the ASIM table for a short time with Dirk, who was relieving Simon, and that's when the photo was taken, by Dirk.

At one I was scheduled to do a signing in the foyer. I was sitting and chatting with Gillian Polack and Ambelin, but Ambelin was the only one who had any requests for signed books. Pity I forgot to bring my bookmarks. I have a stack at work.

I had to leave early because I had a theatre ticket(Ibsen's Ghosts) and had a belated lunch with Edwina first, at a rather nice hotel where they have a $12 lunch deal, and I had a yummy pasta dish, fettucini with smoked salmon and spring onion and a creamy/wine sauce, and we caught up. I never feel as if time has passed when I meet Edwina.

I'm back from the theatre and letting my iPad charge while I write this. Tomorrow's panel on why adults read YA and why we write it isn't until ten, and I can just go out and catch a tram, so no 6 am rising. In the afternoon I have Live Slushpile and a small press panel which I'm moderating.

Posted by Sue Bursztynski at 3:58 AM