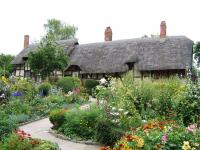 Once every few years I travel overseas. When I do, I’ll try to go somewhere connected with a book or a writer. It’s just a nice thing to do, to know that where you are is where a writer lived or a favourite story happened in the book world.

I’ve been to England twice. While I was there, I visited some places connected with writers I loved. A friend took me to Stratford-on-Avon, where I visited Anne Hathaway’s cottage. Anne was the wife William Shakespeare left behind when he went off to London to be an actor. The house was where she lived with her parents and Will would have visited her there before they got married.

Passing the Stratford Tourist Information Office, I spotted a small plaque on it that told you how old the place was; Shakespeare’s daughter Judith lived there with her husband.


I also visited the mediaeval town Shrewsbury, which is on the border of Wales. It’s a very beautiful place. At the time I was reading Brother Cadfael, a series of mediaeval crime novels by Ellis Peters. Ellis Peters was actually Edith Pargeter, a woman who wrote both historical fiction and crime fiction. She put them together to create Brother Cadfael, a mediaeval monk and amateur detective, living at the abbey in Shrewsbury during the mid-twelfth century, when there were two people fighting over the British throne. 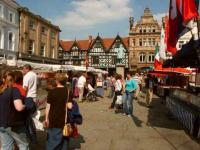 After that, he told my mother and me about the church and pointed out some places mentioned in the novels. What was really wonderful was that you could walk along the streets and recognise the layout from the novels.
In Oxford, a friend took me to the Eagle and Child, a pub where J.R.R. Tolkien and his friends used to go regularly for a drink. It was known locally as the “Bird and Baby”.

And speaking of Tolkien, I couldn’t go to Hobbiton or Gondor, but, after the release of the Lord of the Rings movies, I could go to New Zealand, where the movie was filmed. New Zealand is a gorgeous country, whatever your reason for going.

In 2003, I booked a tour on something called Magic Bus, travelling New Zealand and went.

One place I visited was Queenstown, in the south. Queenstown is a place well-known for its sports facilities. You can do everything from skiing to bungee-jumping. Only one member of the tour group wanted to bungee-jump, though, and while we all cheered her on, we stood on the bridge across the river and gazed at the water that had played the role of the River Anduin in Fellowship of The Ring. Of course, they’d had to remove the traffic from the background and add in giant statues of Aragorn’s ancestors, but it was pretty impressive anyway.

During the three days we were there, my mother and I went on a half-day Lord Of The Rings tour. The tour guide was a pleasant American-Kiwi gentleman who had been cast as an Uruk-Hai orc. He took us to the Remarkables, where the Misty Mountains scenes were filmed. 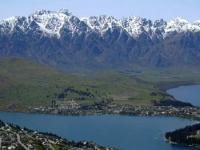 We also got to see a bit of stream where the Nazghul had turned up to threaten Frodo.

Once we’d seen all these places, it was easier to notice them next time we saw the films.

Book – and movie – travel is a special thing to do.

Posted by Sue Bursztynski at 8:43 PM