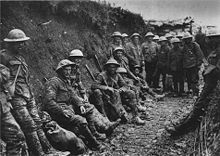 Here's what will appear on my Insideadog blog tomorrow morning.


As I write this, it’s still Remembrance Day. I thought I’d put in a short post on the subject. November 11th 1918 was the official end of World War I, or the Great War as it was known then. There hadn’t been any previous world wars. So if you ever read a novel set at that time and find a character referring to World War I (and I have come across it) you can feel free to laugh.

It really was a great – in the sense of huge – war. Millions died during it, on truly horrible battlefields from France to Gallipoli.

And it led to some amazing writing. Just go look up Wilfred Owen and Siegfriend Sassoon, the two most famous war poets of that time. Sassoon lived to a ripe old age, but Wilfred Owen died in the war. The really sad thing was that he was killed in battle in France only a few days before the war ended. Go check out his poem, Dulce Et Decorum Est, which gives you a real feel for the horrors of that war, with its trenches and gas attacks.

Another writer who was involved in that war was J.R.R. Tolkien, author of The Lord Of The Rings and The Hobbit. Tolkien served in France, on the Somme. It’s said that when he thought of hobbits and their personalities, he was thinking of the ordinary English soldiers (he was an officer). When you read about Frodo and Sam trudging through the Dead Marshes  you’ll have some idea of what it was like in the French battlefields; that’s what he imagined when he was writing those scenes.

Strange to think some of the most powerful writing ever created came out of such tragedy!


Posted by Sue Bursztynski at 2:46 AM