This is what I posted on today's Insideadog. By the way, the offer for bookmarks or mini-posters holds for this web site. However, the first two sets are going to Lan and Miffy, who commented on the IAD web site, many thanks, ladies! Lan, I'll be in touch by email and I'll send a message to Miffy on Goodreads. Tonight's IAD post will be on writing. I'll think of something after dinner and Dr Who.

In the old days, most books were stand-alone, and then J.R.R. Tolkien wrote this thick book called Lord Of The Rings (which, by the way, was a sequel). The publishers thought it was just too long to publish as one big book, so they broke it up into three volumes. It worked so well that publishers of fantasy fiction have been doing books as trilogies ever since. Also, tetralogies (four books) and spin-off series and … and … and.. You get the point.

Here are some of my favourite series:

Terry Pratchett’s Discworld: It’s flat and sits on the backs of four giant elephants which stand on the back of a massive turtle. There are 39 novels so far and they are so funny I don’t mind reading and re-reading them. There are a number of characters who appear in more than one book – the City Watch (police), the witches, Death and his horse Binky and a totally useless wizard called Rincewind.

Quentaris: this is sort of like Renaissance Florence with magic. It’s written by a lot of terrific Australian writers. There are things called the Rift Caves, which lead into other worlds, so people can travel back and forth, with the help of Rift Guides. That means almost anything can happen and usually does.

The Cairo Jim series. Cairo Jim is an archaeologist based in Egypt, but travelling all over the world with his wonder-camel Brenda and a macaw called Doris. They’re hilarious and also excviting.

Harry Potter – no need to go into detail here, of course! I’ve read them over and over.

The Ranger’s Apprentice: I’m still reading the series (six books in), but loving it. There are eleven, including the Lost Stories, and the author said, at the launch of Brotherband 1 (the spinoff) that there would be one more book at some stage, in which the hero Will takes his own apprentice and her name is Madeleine. Stand by.

There are plenty more, but I’m going to leave it to you to share your own favourites.

So far nobody has cone up with a suggestion  for the cast of a Ranger’s Apprentice movie, so I’m going to add another character to the cast list. (There are plenty on Youtube, by the way, and I’ve had fun checking them out.) 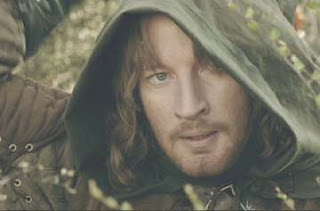 How about David Wenham for the role of Halt? It’s kind of hard to find people of the right height and David Wenham is quite tall. But take a look at this picture and tell me  that doesn’t look like a Ranger!

I’d like to encourage you guys to respond to this and other posts, so there will be six Crime Time bookmarks or some mini-posters that you can stick on your school books for  each of the first ten comments. I’m planning on bigger prizes for later, including a signed copy of one of my books, Crime Time or Wolfborn. I also have a laminated Wolfborn poster to give away.

I am loving the Obernewton series by Isobelle Carmody. Greedily reading Book six which has just come out.

Well, you aren't the only one who's been waiting for it - and I think it's been divided into two. She's been writing this series since she was fourteen (published only a few years later) and it's only just finishing up (but not yet! Volume 7 to come). What I've been waiting for is Volume 3 of the Legendsong trilogy - kids have grown up and had families since Volume 2 came out! And it ended on a cliffhanger.

Thank heaven it's finally on the way - when I met IC at Supanova in April, she said she was 400 pages into it.

Come to think of it, Supanova in April was when I met you! ;-)