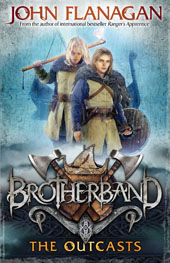 This is a spinoff from the Ranger’s Apprentice series, through which I’m currently making my delighted way. I admit I had only read the first book in that series, The Ruins Of Gorlan, when I read this, and saw some resemblance to that book, although it’s set in another country, Skandia, the Norse analogue, rather than Araluen, which is clearly Britain.

Hal Mikkelson is the son of a Skandian warrior and his Araluen wife, who was brought to Skandia as a slave, then bought and freed. Hal’s widowed mother is now running a successful food shop.

Boys of Hal’s age are required to undertake training in the skills they will need as warriors – fighting, ship-handling and so on.  It involves being divided into teams called brotherbands, which live, train and work together in a sort of boot camp and compete for the prize at the end. The only problem is, brotherband teams are the same in Skandia as they are in the average school in our world: there are always the ones nobody wants on their side, who are left over when the choices have been made. Hal is part of a group nobody else wants, for various reasons. There’s a boy who has a tendency to lose his temper, twins who are always fighting each other, a thief and other unpopular boys. But Hal has something the big lumbering types don’t have: a brain. He’s an inventor who has built a boat much more efficient than the traditional Skandian wolfship, among other things. His Heron team may have more of a chance than they think.

Like Ruins of Gorlan, this book has a hero who isn’t a tall, muscular warrior type, but has a friend who is. Like Will, he has other skills he can use. And like the first Ranger’s Apprentice novel, it's about the training and not a lot happens till near the end, but stick with it. It’s an introductory volume that concentrates on building up the characters and the background. Somehow, it manages to end on a cliffhanger and I fully expect a much more action-packed sequel.

You just have to love the Skandians, despite their culture of “liberating” stuff from outside and then getting upset when someone steals from them. Their idea of battle tactics is, “Charge!” By the time of this novel, there’s an Araluen archer team in the town of Hallasheim, started at the end of Oakleaf Bearers when Will, Halt, Horace and Evanlyn helped push back Temujai (Mongol) invaders.

Things I really like about this book and the original series: the character development, the humour, the believable societies, the way it feels like history set in another world rather than standard fantasy. I love the world-building. I love the fact that even Mr Flanagan's heroes make mistakes, sometimes with hilarious results, such as the mayhem that results from Hal's attempt to supply his mother with running water in the kitchen.

I do advise you to read the original series to get more of a feel for this universe, not to mention the great fun of the series.  It’s  well worth the effort.
Posted by Sue Bursztynski at 6:35 PM