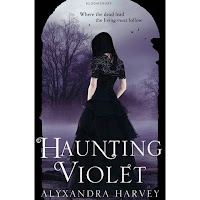 Alyxandra Harvey is best known for her popular Drake Chronicles series, about the likeable family of vampires, the Drakes, with all those truly hot sons and an ass-kicking martial arts mother. They’re among the few vampire books I enjoy, mainly because they have a sense of humour and aren’t really about vampires biting people but about fights between various vampire clans, ranging from those who think humans are cattle to those who, like the Drakes, are happy to get their blood without harming anyone.

In Haunting Violet, Ms Harvey moves from present-day rural America to Victorian England, when séances were a regular part of middle-class entertainment and there was an entire spiritualist movement.

Violet Willoughby's mother is a phoney medium, making her living from convincing grieving families that she can communicate with the late Horace or Amelia. Violet has been helping out in the business since childhood, unhappy but knowing there isn’t a lot she can do about it. It’s a living –and her domineering mother is scary! While at a house party where her mother is expecting a triumphant performance, Violet is horrified to find that there really are ghosts – and she can see them. Even worse, the most persistent ghost is the murdered twin sister of one of the other guests. If Violet doesn’t find the murderer, the killer may strike again.

It’s either solve the mystery or end up an old woman with the carpet still dripping with the water in which the body was dumped - that's if she isn't murdered herself!

Despite the gloomy cover, there is plenty of the over-the-top humour that makes the Drake Chronicles books such fun to read. The image of Violet turning up at a society ball in her soggy, muddy underwear after fleeing the murderer is unforgettable. The class structure of the time as seen through Violet’s eyes is bizarre but funny. It's wise to set this in Victorian times, when it might be possible to get away with a murder of this kind. If it had happened in the present day, the forensics team and detectives would be all over the crime scene before coming to the conclusion that it was an accident - especially with the victim having bruises at throat and wrists.


Definitely recommended!
Posted by Sue Bursztynski at 3:37 AM