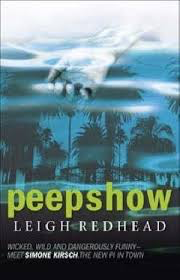 This is not a newly published book. I bought a copy from the bookseller table at a Sisters In Crime event at my local library the other night. I don’t think it’s in print any more, so the author probably supplied some books from her stash to the bookseller. However, it’s easily available as an ebook on your favourite web sites.

It’s the first in a series, four so far, which is about Simone Kirsch, aka Vivien Leigh(her work name), a stripper who wants to start her own private detective agency, and has taken a course in this area. In this first novel she is trying to find the killer of a truly nasty man running a strip joint, whose body was found floating off St Kilda beach in the opening scene, because his brother has kidnapped Simone’s best friend Chloe and is threatening to kill her if Simone doesn’t find the murderer within two weeks. She gets a job at a lap dancing joint which was owned by the victim, to see what information she can find before time runs out.

I think this book fits best into the category of “tart noir”.  There is sex, the mean streets, drinking, smoking, casual use of drugs and much more along those lines. But it’s fun. Simone is a likeable character and the setting is Melbourne, where I live. In fact, it’s set in the part of Melbourne where I live, the seaside suburbs of Elwood and St Kilda, as well as the CBD. Most of the venues are real too, so I had fun following Simone’s travels around town. The Greyhound Hotel, where some of it happens, was pulled down some years ago, but it was within walking distance of my home. There is also the Espy(Esplanade Hotel), a pub and live music venue in St Kilda, where my nephew performed with his band several years ago.

It’s said you should write about what you know, and apparently the author had some background as a stripper. It doesn’t seem an easy job!

I read this in a couple of days and have bought the second novel in ebook.

Well worth a read if you enjoy a bit of whodunnit fun.

Posted by Sue Bursztynski at 11:37 PM

I always think it is a lot of fun to read books set in your postcode. You can really see the settings and imagine the characters on their day to day.

That's a unique and interesting premise for a detective mystery series!

Hi Sue - sounds a fun read ... and what fun for you to follow along the streets you know so well - cheers Hilary

Hi Hels! You live in Melbourne, what do you think? 😂

Hi Anita! Yes, great to see the streets in your head because you live there. Also nice to visit somewhere so well described that you can follow those streets when you get there. I remember how excited I was when I visited Shrewsbury, so well described by Ellis Peters.

Hi Debra! There are so many cozies with characters in different occupations. This isn’t a cozy, though, and I have to admit I haven’t come across strippers as main characters before.

Hi Hilary! Yes, a lot of fun. The novel was written a while ago and some of the places mentioned have closed or even been knocked down, but I remember them.