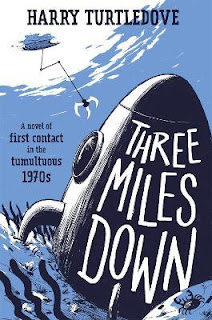 The year is 1974. The U.S President is Richard Nixon, who is soon to lose his job. Jerry Stieglitz, a young PhD candidate in marine biology, who also writes science fiction, is approached by the CIA to go on a mysterious voyage. At first he is told they want to raise a Soviet submarine which was destroyed a few years ago.

But there is much more to it than that. There is a reason the Soviet submarine was sunk. That, not the submarine itself, is why they want him along. And it’s something very exciting - as long as he can keep his mouth shut. If he can’t, he is warned he will be dead soon after.

They have found a spaceship, which probably sank the Soviet craft, but so far nobody on the alien ship is responding.

This seems to be a first contact novel, but it isn’t, really. It takes a long time for the spaceship to be raised, then for it to be examined. Jerry gets to do that along with another crew member. I won’t give you any more details before you read it.

The first few chapters are a bit slow. There is a lot of discussion, both political and speculation on what’s in the spaceship and whether their own ship will be wrecked like the Soviet one. There is much detailed description of what they eat for breakfast, lunch and dinner. We are also told what science fiction books have just come out, and real people, such as SF authors Ben Bova and Jerry Pournelle, are mentioned before actually appearing later in the book.

But the characters are good and the pace picks up after the spaceship is raised from the bottom of the sea. And there is some thought about whether it’s fair to have the US keeping all this to itself, or whether it should be sharing.

It’s interesting to read about the era, before mobile phones, before the internet, before the Soviet Union fell(and after first contact, how different will that be?). Harry Turtledove was around at the time, but he is very good with history, even if it’s not the alternative universe for which he is best known. It took me a while to get into it, but I finished the second half in a couple of days.

The book is available in all your usual good bookshops and websites, including Amazon, Booktopia and Book Depository. I bought mine in ebook on Apple Books.

Posted by Sue Bursztynski at 12:11 AM

I was around in that ancient, primitive era of 1974 too, about to graduate from high school.

Hi Debra! I was in my third year of university.