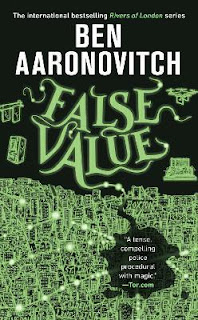 I have just read False Value and thoroughly enjoyed it, as I have all the Rivers Of London novels.

Hero Peter Grant, a member of the very small Special Assessment Unit, London’s magical police, has a new - undercover - job at the Serious Cybernetics Corporation(and yes, it is a deliberate reference to The Hitchhiker’s Guide To The Galaxy). There is a reason why the police want to know what’s going on. It’s connected with Ada Lovelace, daughter of Lord Byron, who was a mathematical genius and the world’s first computer programmer, and her teacher, mathematician Mary Somerville. In this world, where magic is real and Isaac Newton was a famous mage, there is a physical Mary Engine, instead of just a theory paper. And someone is using it for nasty stuff.

Peter is awaiting the birth of twins with his partner, river goddess Beverley Brook. Interestingly, there isn’t much activity by river gods and goddesses in this novel. They are mentioned, but don’t appear for once, and Bev is too focused on her forthcoming children to get involved.

I would have thought the series would be going downhill by now, but no. Each novel has something new to be enjoyed.

But you really do have to have read the others to be able to follow this one. It assumes you know who the characters are and what their backgrounds are. Peter, for example, is the son of a woman from Sierra Leone and a (white) jazz musician. Bev is the daughter of Mama Thames, an African woman who arrived in Britain in the 1950s and became a goddess. Nightingale is Peter’s “Governor”, who taught him magic.

If you are a fan, you just need to know that this one is absolutely worth reading. If you haven’t read this series, what are you waiting for?

My copy is in ebook, but your local bookshop or web site will have it.

Posted by Sue Bursztynski at 6:23 PM

Hi Sue - I hate to say it ... but I haven't come across these before - they sound intriguing and on your recommendation ... I'll definitely be looking into the series - thanks for the thought and the way to read them. I've taken note - cheers Hilary

Hi Hilary, hope you enjoy them! Start with The Rivers Of London, the title novel, the first in the series.

I was always impressed by this very clever Aaronovitch family, academics and authors of note!

But I never pursued The Rivers of London because I assumed the author of Dr Who would not be appealing to me in his later works. Spouse *poke*.. my birthday is coming up!

I hope your spouse pays attention! 🙂 It’s a delightful series, and the audiobooks are read by Kobna Holbrook Smith, who would be perfect for the role of Peter Grant if they ever filmed them.

Thanks Sue - I must get my reading life organised ... I'm on the way - Rivers of Life .. noted! Cheers Hilary

Sounds interesting, but I am on a no new series self-imposed restriction at the moment. I don't have much time to read and I have too many to be read already. But it does sound really good.

I do understand the wish not to get stuck into series, but really, as long as you know what it’s about, each novel is more or less stand alone. They don’t end on cliffhangers, I mean. You can read the first one and not the rest if you want.