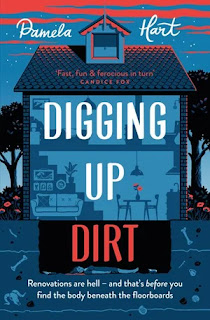 Poppy McGowan works for the ABC as a researcher for a children’s TV program. She is renovating an old house she has just bought when bones turn up under the floorboards. Until it has been decided whether they are human or animal she can’t continue, and it’s not a good idea to call the police unless the bones are human, so she decides it’s time to call on the archaeologists from the museum to find out.

Unfortunately, the only one available is Dr Julieanne Weaver, an old enemy, and though the bones are those of sheep, she wants to slap a heritage order on it, making it impossible for the renovations to go ahead.

When Julieanne’s dead body is found in the house, there are several suspects, beginning with Poppy and Julieanne’s gorgeous boyfriend Dr Tol Lang. Is it Poppy’s own boyfriend Stuart who did the deed? What about members of the Radiant Joy Church which is behind the Australian Family Party, for which Julieanne had hoped to be preselected as a candidate?

Will Poppy ever get her house back?

This cosy mystery is the first of a series by Pamela Hart(also known to her readers as  children’s author Pamela Freeman). It is great fun and the author certainly seems to know about how television programs work. The children’s show for which Poppy works is not unlike the ABC’s Behind The News, though with themes rather than news.

The regular characters of future novels in the series are introduced in this one, starting with Detective Chloe Prudhomme and her sidekick Steven Martin(and yes, he winces when he has to introduce himself). I think they will do well, though I’m hoping Chloe gets to do more than groan and sigh when phoned with new information. She does come through when needed, though, and possibly will trust Poppy more in the next adventure, when they know each other better.

Though the novel is humorous in style, Poppy herself is kind and decent; she finds herself pitying the victim, whom she disliked when she was alive, and finds sympathy to a badly treated teenage girl who is part of the family of one of the suspects.

Sydney, where the novel is set, is almost a character in its own right; the author makes it a part of the story without being just an exposition.

Highly recommended if you enjoy a cosy mystery!

As a recently published work, it should be easily available in all the usual places, including Amazon.

Posted by Sue Bursztynski at 2:37 AM

Hi Debra! For me, it’s beach reading in January! 😂

Thanks Sue. I love finding out about more cozies to read or, at least, the bullies get their comeuppance and the ending is satisfying. That's just where I am these days. So thanks.

Thanks for your recommendation. An Australian mystery is extremely appealing because I already understand the locations, life styles, vocabulary, grammar and legal systems. Even the Radiant Joy Church and the Australian Family Party sound familiar.

Hi Terry! Yes, there is something about cosy mysteries that is a bit like romances: you know that the good guys will win in the end, and, yes, the baddies will get their comeuppance. I prefer cosies to psychological thrillers. I don’t mind police procedurals, but mostly like Dalziel and Pascoe, where you like the characters.

Hi Hels! Yes, I love Australian mysteries too. Most of my favourites are by local authors. I hope you can find a copy of this one.

You're better than me: I am reading very slowly since he beginning of the year. I'm better with the writing though: I have been writing more since the year started, thanks to my editor giving me more feedback.

Hi Guillaume! I have had the book for a while, but only just got around to reading it.

I barely had time to read anything