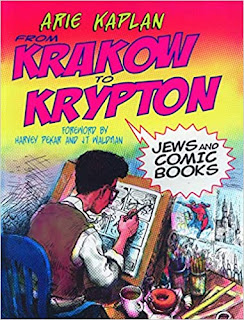 This book is the main reason I’m into Marvel these days, trying to catch up with the films since it’s a bit late to catch up with the comic books it mentions. As a child, about the only comics I got to read were DC’s Superman - with a friend, because my mother wouldn’t let me read comics at home.

I had to order it on line from overseas, but don’t regret the effort. It’s a detailed history of US comics and the role Jewish artists and writers played in it. I did know about some Jewish comic book creators - for example, Joe Shuster and Jerry Siegel, the two Jewish boys who created Superman, and Rene Goscinny, the French writer of the Asterix comics.

What I didn’t know was that American Jewish artists pretty much founded the US comics industry, when antisemitism prevented them getting jobs in commercial art. Oh, there were comic books around, but they were mostly compilations of newspaper comic strips, nothing newly published and certainly not new characters and stories.

The story starts early in the 20th century and goes right through to the present day, including Neil Gaiman and Sandman(okay, he is British, not American, but he is Jewish).

The Jewish illustrators and writers often changed their names. You probably know about Stan Lee(changed from Lieber), but there were quite a few others, such as Jack Kirby(changed from Kurtzberg). I’ll leave you here with the Wikipedia entry for those characters created by Kirby, with others such as Stan Lee and Joe Simon(another Jew, born as Hymie Simon).

If you are a comics fan or watch the movies,you will recognise quite a few of the character names.

Did you know the satirical Mad Magazine was created by Jewish cartoonist Harvey Kurtzman? I didn’t till I read this book.

It’s pretty thorough, including underground comic books, and graphic novels such as the classic Maus - which was once on the Year 12 curriculum at my school, by the way.

It also discusses Marvel and DC characters whom the authors considered Jewish, though they only occasionally had a story where the character said they were.

The most obvious one is Magneto(X Men) who was a Jewish character, no question about it, but there are others who are mentioned in the book, which also includes snippets of the comics.

The book is colourful and entertaining, full of fascinating information I really didn’t know before.

Well worth ordering! It’s easier to buy in ebook than print at the moment, both on Kindle and Apple Books, but there are some print copies available from Book Depository.

There are other books on this subject, and I have a few I’m still reading, so I will get back to you with more reviews when I finish them.

So, what do you think, readers? Any comic book fans out there?

Posted by Sue Bursztynski at 11:24 PM

Sadly, I didn't get to read comics when I was a kid. My mother didn't approve of them. One of my cousins was a comics fan, and on his annual family visits spent the whole time working through a huge stash of comics. Sometimes I'd get a peek at one. They were all Flash and Batman and so on. When I eventually got to read comics I found the Xmen was easiest to get into.

As my own kids grew up I learned through them that there are a lot of interesting comics in libraries these days. Saga springs to mind, although that might be regarded as old now. But, back in the days before lockdowns, it was nice to browse in a library and come across these strange and quirky comics. I remember particularly enjoying one about a pipe and cigar that fell in love. Who even thinks of a story like that, never mind actually pulls it off?

Anyway, the book you discuss sounds like a really interesting account of American comics and it's good to hear that you enjoyed it :)

I didn't know Goscinny was Jewish. But I knew about Superman's creators. Clark Kent is basically a Jewish man as seen through condescending and even antisemitic eyes. His alter ego is of course a Messianic figure.

I learned a lot about Jewish writers and comics in Michael Chabon's The Amazing Adventures of Kavalier & Clay. Of course its not factual but its still a wonderful story which captures the atmosphere.
I love Graphic novels although superhero stories don't realy float my boat. I'm more of a Sandman, Stray toasters Love and rockets type reader.

Hi Terry! Sounds like your Mum and mine were alike in that. My friend lived in a boarding house, where boarders used to leave their soft drink bottles in a crate. In those days we still had deposits on bottles, so we took bottles to the local milk bar, which sold comics, and spent the deposit money on ice cream, soft drink and comics.

Hi Guillaume! Doing a double identity usually does involve a persona that will be underestimated by villains! Percy Blakeney, Don Diego De La Vega, Bruce Wayne(who is inspired by Zorro, who is inspired by Percy Blakeney…), Clark Kent. I believe there were some stories in the early days of Superman which involved Clark and Lois going to the Berlin Olympics and what that implied…

Hi Jane! Yes, that novel is wonderful! It gets a chapter in a book called Superman Is Jewish?

My mum also didn't allow comics but I assumed that was because of the poor spelling, poor grammar and pro-violence seen in the frames. But once, when I was sick in bed (measles?) back in the 1959-60 era, she brought home Archie comics who co-starred Betty and Veronica. I enjoyed them very much :)

Look who the 1940s creators of Archie comics were: John L. Goldwater and Louis H. Silberkleit.

Hi Hels! My Mum forbade comics because her brother in law threw out all of hers and said they were rubbish! A few years ago, she said to me, “Well, you never read comics and it didn’t hurt you.” I said, “Uh, Mum, about that…” 😂

I take your point about the Archie creators! 🙂

Hi Sue - how very interesting ... I've ordered the book on a 'want to read, and to know more' basis!! ... I've essentially no knowledge of this side of life - it'll be an eye-opener.

But have posted a couple of blogposts about African comics: Kugali Comic Club; and Afrofuturism - which I note you commented on in my post of 7 May 2019 and on Afrofuturism in late April 2019 (which you didn't comment on!). Cheers Hilary

When I was younger, I used to love reading comic books!

Hi Hilary! Sorry I missed that post of yours. Glad to hear you find this of interest, though! I hope you enjoy the book.

Hi Lon! Welcomed to my blog! Quite a few adults enjoy comics these days too. 🙂

I read as many comic books as I could get my hands on when I was a kid! But they were expensive (12 cents a copy!) so we kids swapped comics and re-read them an infinite number of times. I read a lot of DC, a bit of Marvel, lots of goofy cartoon character ones, "Classics Illustrated" etc. As an adolescent, I switched to MAD Magazine and Cracked, then as an older teen, National Lampoon.

I know about the pivotal role of Jewish creators in the comics industry, especially in Marvel characters (which have always had more emotional/existential depth and complexities than DC characters). The Jewish "outsider" viewpoint regarding mainstream society was invaluable in crafting classic characters and advancing progressive ideas.

Hi Debra! You have been through quite a lot of comics in your time, haven’t you? Wow! MAD once published a cartoon in which a lot of people are lining up outside an office where there is a sign saying,”Aliens register today” and among all those humans from other lands is Superman… 😂

I have promised myself that when our current lockdown is over, my birthday gift to myself will be a visit to our local comics shop, which I haven’t visited since they stopped selling SF books to focus on comics, and pick up some volumes of old comics to catch up on a few at least. It may be a while, though.

Yes, I read a ton of comics as a kid, but not as an adult. I've only just started to read the occasional Marvel limited comic series here and there now in the last 5 years or so. I enjoy the art of comic books more than the plots/dialogue which are (quite frankly) often lame and rather superficial. For better characterizations and emotional/psychological depth, fanfiction is where it's at! I'm glad you checked out Archive of Our Own, it is THE place for fanfiction on the internet, as far as I'm concerned. Of course, the quality there varies according to the writers but some of it is quite astonishingly good and could easily be publishable in the mainstream if not for the copyright issues!

Hi Debra! I wrote fan fiction for many years, mostly Star Trek TOS, and Blake’s 7, with a few Robin Of Sherwood pieces. I certainly learned a lot from doing that, and eventually started selling because of it. There are some big name writers who can say the same - and some who cheerfully admit to STILL writing fanfic, including one who I told on Twitter that I had enjoyed her fan fiction in the old days, who said,”what makes you think I’m not still writing it?” 🙂

I love the old print fanzines because of the art and the fact that editors could pick and choose. And there were letters commenting on the stories. I think that may be the case on fanfic web sites, but I loved curling up in bed with a new fanzine!