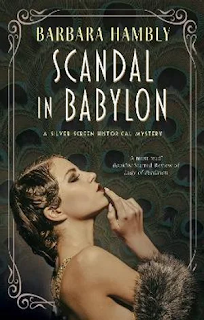 I have been reading Barbara Hambly’s books for many years, starting with a gorgeous fantasy novel, Dragonsbane. Next I read the Darwath trilogy, which had such a nice twist at the end, then the wonderful portal fantasy series, the Windrose Chronicles, which she is still writing in the form of self published novellas, novelettes and short stories. Her wizard hero, Antryg Windrose, is basically the Doctor, something she cheerfully admits - the Tom Baker Doctor, if you can imagine him wearing cheap jewellery instead of a scarf, and settling down with his computer specialist Companion after the Council of Timelords nearly succeeds in killing him.

But she has done a lot more than fantasy, including horror fiction and historical crime fiction. The James Asher vampire series is still going.

My favourite of her historical crime fiction so far are the Benjamin January novels, set in New Orleans in the 1839s/40s, seen from the viewpoint of a free African American surgeon and musician who solves crime. These novels have never gone downhill after 18 novels and several short stories.

So, I know she can write whodunnits set in earlier eras. I snatched this one off Apple Books as soon as I learned it was out. Historical murder mystery? By Barbara Hambly? Yes, please!

And yes, it was good fun. It was set in Hollywood in 1924, seen from the viewpoint of Emma Blackstone, a scholarly British woman, widowed when her American husband was killed in the Great War and brought to the US by his glamorous sister Kitty, a silent movie star. There, she works as a scenarist for the movie her sister- in-law is acting in, balances her cheque books, pays the bills and looks after Kitty’s three adorable Pekinese dogs.

Sound familiar? If it does, you have probably read this author’s novel Bride Of  The Rat God, which has pretty much the same characters with different names, except the dogs, which have the same names, quite deliberately. The main difference is that there aren’t any fantasy elements in this one. It is a straight whodunnit, in which Kitty’s unpleasant ex-husband is murdered in her dressing-room while waiting to have a Word with her, possibly involving blackmail. And guess who is the obvious suspect?

It seems this will be the first in a series called Silver Screen Historical Mysteries. I have no idea whether the next novel will feature the same characters, but I will be reading.

Unfortunately, Bride Of The Rat God, a delightful novel, seems to be out of print, though it’s still available in audiobook. There is a sequel, short story “Castle of Horror”, which is available in ebook, one of the self published stories the author has been posting online. But you don’t need to have read Bride Of The Rat God to enjoy this new novel. There is the same flavour of fun and colourful cinema history, with a different focus.

Very much recommended and available in ebook or print, in all the usual places.

Posted by Sue Bursztynski at 4:37 AM

While I don't like horror fiction, silver screen historical mysteries appeal to me immensely. I watch the silver screen histories on Foxtel and I imagine the mysteries could well have been (loosely) taken from actual events. My father described the Fatty Arbuckle case a number of times, showing the shoddy aspects of the off-screen lives of Hollywood stars.

Hi Hels! I love historical mysteries too. I’ve been reading this author’s Benjamin January novels, which are wonderful, and are set in 1840s New Orleans, with all its culture. This one is great too, and she does have her research on the background already there, after Bride Of The Rat God, so why not!

Well, you had me at Antryg Windrose having been inspired by Tom Baker! Thank you so much for the recommendations.

Hi Wen, and welcome to my blog! Yes, Antryg is very much the Tom Baker Doctor. If you are curious, the first novel is The Silent Tower. You may have to buy it in ebook, as it seems to be out of print. But it is easily available in Apple Books and maybe Kindle.