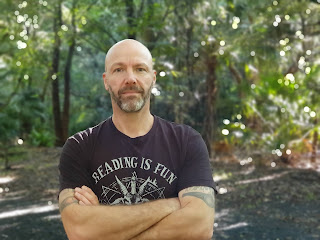 Today’s guest post is by award-winning Aussie horror writer Alan Baxter. Alan is one of a lot of Australian spec fic authors who  find their inspiration in our sunburnt country and don’t need to set their stories in the US or Europe.

Anyway, I’ll let Alan tell you all about it himself - welcome to The Great Raven, Alan! Take it away! 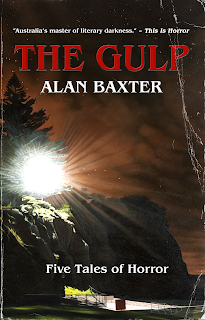 Okay, let’s get this out of the way immediately. The title of this piece is clickbait and the answer is obviously no. There can never be enough weirdness. And frankly, in this current world, more weirdness can only be a good thing.

But I get questions like this a lot. Along with “Why do you write such horrible stuff?” which I’ve answered elsewhere. (And for the record, it’s not horrible – it’s honest.) But the weird? Ah, now that’s something different. I’ve always been absolutely fascinated with just how weird and bizarre real life can be. The number of times I’ve seen a news item or an article and said, “If I wrote that into a story, every editor in the land would tell me it’s too on the nose and I’d have to change it.” I think it was Neil Gaiman who said (and I paraphrase), “The trouble with fiction as opposed to real life is that people want their fiction to make sense.” But make it weird and you have a lot of leeway.

Weird in this sense harks back to the kind of strange fantasy of H P Lovecraft and Robert E Howard, and even before. It’s that sense of non-human, of irrational, of cosmic bigger-than-us human insignificance. There’s a lot of horror that deals with stuff built from an Abrahamic mould. And other cultures draw on their own religious myths. There’s also old folk-horror and nature-horror, which are some of the earliest myths in most cultures. These bleed into each other and have enormous scope, and people still write wonderful stories using those themes to this day. I do as well sometimes. But there’s something less restrained in the horror that assumes all of that has limitations, and looks beyond it.

Every brand of horror and fantasy has its place and they’re all fabulous. But I’ve been drifting further away over recent years and looking to horrors beyond our mortal and even galactic boundaries. We are but dust in the greater cosmos, and isn’t that the greatest horror of all?

But that in itself is a horror story told and finished. We are nothing and everything is pointless. It’s far too nihilistic, and on a human level, despite our insignificance in the greater universe, we are far from insignificant to each other. We are as important to each other as it’s possible to be. Kindness is the greatest human attribute, in my opinion. We need to look after ourselves and each other and the world around us. It’s the confluence of those two things that makes cosmic horror and the weird so appealing to me.

In the face absolute nihilism, some people will prey on others with no guilt. Other people, the vast majority thankfully, will try to look out for each other. I explore those themes a lot in my stories. Recently I wanted to create a place I could return to again and again that would give me somewhere to play. A place so soaked in cosmic indifference, yet so intensely personal, that all kinds of weirdness could play out. So I created the isolated Australian harbour town of Gulpepper, called by locals The Gulp, as it has a habit of swallowing people. When reviewers for the first volume of Tales From The Gulp said things like “Baxter has found his Castle Rock”, I was happy. Because that’s what this is supposed to be for me. This region, with The Gulp nestled away in the bush by the ocean, and the towns of Monkton and Enden about half an hour’s drive away north and south, is a wonderful sandbox for me to make castles and knock them down. It’s somewhere for me to explore the Weird on a deeply human level, with people just like you and me. Well, some of them are really quite different, but most are just like you and me.

The first volume of Tales From The Gulp is out and I’m working on the second set of stories. I’ve also recently finished the first draft of a novel set nearby. There is so much scope to the weird. There’s never enough. I hope you’ll come along with me for the ride.

Thanks, Alan, for sharing your thoughts on weird fiction, and your new book!

If you want to buy it either in ebook or print, it’s readily available on Amazon. I have just downloaded my own copy from Apple Books, and am looking forward to reading it!

Here is a link to the Gulp page on Alan’s website.

Posted by Sue Bursztynski at 6:23 AM

I agree: the more weirdness, the better. There's a quote I like from one of the Sherlock Holmes stories: "There's nothing more unnatural than the commonplace." The world is weird. People are weird. If we all could just accept those truths, the world would be a better place.