T.H White is the author of The OnceAnd Future King, which may be the definitive modern Arthurian novel. Interestingly, while it’s his best-known work - and he wrote a lot of books! - the one which allowed him to give up teaching and write full time was not that one, but a memoir called England Have My Bones, which was a bestseller, published before The Once And Future King.

Anything that gave him the chance to write that wonderful book!

I bought my copy at my local newsagent for $1.60. I was reading stuff for university at the time and there was one book I could only get through by promising myself another chapter of T.H White’s masterpiece.

Terence Hanbury White was born in India in 1906. At the age of 11 he was sent to England, where he lived with his grandparents and was enrolled in Cheltenham College, a school where he was very unhappy, though he did like one teacher, C.F Scott, who encouraged him in his writing.

He had to do a year’s private tutoring to raise the money to enrol in Cambridge University in 1925. Again, he found a tutor who liked and helped him, raising money for him to go to Italy to recuperate when he contracted TB. In Italy, he wrote his first novel, but his first publication was a book of poetry.

Between 1930 and 1936, he was writing about seven books while working at his teaching day job. So, those of us who have found it hard to write with a day job, especially teaching, could definitely  take a lesson from him.

Then he put together a book of bits and pieces of a year in his life, England Have My Bones. It was a huge success and he could finally give up his day job and get on with the writing!

While staying in a gamekeeper’s cottage near his workplace, Stowe School, which is still around, he curled up with Malory’s Morte D’Arthur, just for the enjoyment, and absolutely loved it. He said afterwards that it was a perfect tragedy with a beginning, a middle and an end that was implicit in the beginning. He found the characters believable. It was, he felt, still relevant to his own era.

In the end, of course, he was interpreting them in his own way, and I have to say, I do like his interpretations of Malory’s Arthurian characters. I even found myself caring about White’s Lancelot, and that’s saying something. 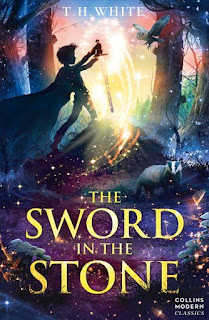 The novel was not written all at once, but in separate volumes. They were The Sword In The Stone, The Witch In  The Wood(later The Queen Of Air And Darkness) and The Ill-Made Knight, and, unlike Tolkien, he managed to get the first three books written and published between 1938 and 1940. The fourth volume, The Candle In The Wind, was never published by itself; it came out as part of The Once And Future King in 1958. There was a fifth volume, The Book Of Merlyn, which was intended to be part of the full novel but was not published till 1977, well after his death. I’m old enough to remember that. It came out as a separate book.

White was a pacifist. If you read his Arthuriad you will notice that. Merlyn turning Arthur into animals and birds teaches him about the stupidity of war. As a bird, he can’t see borders. Those are, after all, artificial.

It has been said that White’s Merlyn(as he spells the name) is a lot like Albus Dumbledore. Well, he is, sort of, though he doesn’t have a tragic family history and Dumbledore is certainly not living backwards. I’d say that there is a resemblance also to Tolkien’s Gandalf. Maybe the likeable and loopy old wizard is a trope which appears all over the place. Terry Pratchett’s Unseen University wizards tend to be lazy, overweight characters who spend their days waiting for the next meal and hiding from the students. However, I can see Pratchett’s likeable Mustrum Ridcully hanging out with White’s Merlyn.

White died on a Mediterranean cruise in 1964 and was buried in Athens, but he did live long enough to see both Disney’s animated The Sword In The Stone and the musical Camelot. That is good to know!

Here is the trailer for that Classic Disney film! Enjoy!

Posted by Sue Bursztynski at 3:45 AM

One of my all-time favourite novels! I remember when "The Book of Merlyn" was published too -- it was a big literary event! I was in university at the time and bought a copy right away.

A very special book! A pity The Book Of Merlyn wasn’t published with the rest of it. Still, better late than never!

I read Sylvia Townsend Warner's biography of T.H. White when I was in college. He was a fascinating person.

My favorite adaptation of The Once and Future King was a filmed stage performance of Camelot that was shown on HBO in the early 1980s. It started Richard Harris (the future Dumbledore) as King Arthur and is far better than the 1967 film.

Hi Liam! I think that was the production I saw here when he was on tour. His Guinevere was a young woman who had just started in show business - Marina Prior - and is now a big name in Australia. Unfortunately, by the time I saw it Richard Harris had been doing it for so long he was walking through the role and clearly bored with it. And too old for it anyway. But he did do it well in the film.

I saw a touring production in the 1990s where Robert Goulet starred as King Arthur. It didn't make much sense for the guy who sings really well to be in the part written for someone who doesn't sing well, but it was enjoyable enough.

Yes. I’ve always thought it odd that Lancelot, a singing role, gets only a couple of songs, while Arthur, basically an acting role, gets several! It would have been interesting to hear how a singer would do those talk-sing songs of Arthur’s, though.

Obviously I am lacking in my reading. I haven't read this one, but will write it on my list for when the libraries re-open.

If you read ebooks, you might like to see if your library has it that way. I have been having a great time borrowing ebooks and e-audiobooks since my library closed physically.

In a way I can say that this book has been on my radar my whole life. Back when I was a teen I remember thinking about reading it. Every so often I think of picking it up but I never have. I must finally get around to giving it a try. I am sure that I will like it.

Definitely time to read it! Now that we are all locked down it’s a good excuse to try something different,

I've added all his books to my TBR :-) Thanks for the recommendation!

An A-Z of Faerie: Witches

Hi Ronel! I hope you enjoy them!

Although it's not my first Arthurian encounter, T H White's Sword in the Stone and subsequent books added to my fascination and enjoyment back in my youth. A touch of magic that helped develop me as a reader, perhaps as a writer.

Never managed to like The Sword in the Stone, but then again I was raised on Excalibur. I must confess, being a XIIth century French literature specialist, I never read T.H. White.

H Guillaume! Actually, if you read The Sword In The Stone, you HAVE read T.H White. 😁 His fiction was based on a 15th century version of the legend. By the time Excalibur came out, I was an adult and had already done my Honours thesis on Middle English Arthurian literature, so I had read a great variety of the stuff, from different eras, plus modern fiction based on everything from Geoffrey of Monmouth onwards. I loved Excalibur as a film, but was happy to try it all. Excalibur is a mishmash of periods anyway.